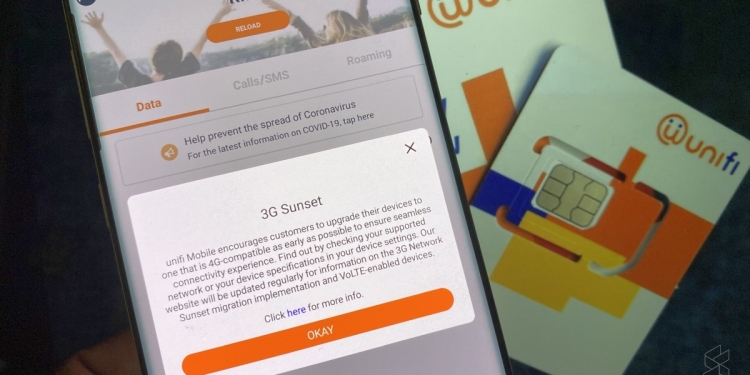 Under the JENDELA program, Malaysia aims to shut down 3G networks by the end of this year. While most telcos are gradually switching customers to 4G devices and upgrading the remaining 3G sites to 4G, Unifi Mobile is currently in a unique situation.

Unifi Mobile doesn’t have a 3G network and their current 4G LTE coverage is still not as extensive as its competitors. To provide nationwide coverage, TM currently has 3G domestic roaming with Celcom to cover areas that don’t have 4G coverage. So what happens when Celcom shuts down their 3G sites?

When asked about TM’s plans for 3G sunset, TM Group CEO Imri Mokhtar said during a recent JENDELA meeting that they are working closely with their partner Celcom to ensure their Unifi Mobile customers are covered. Although he didn’t mention it specifically, it is a high possibility that TM might tap on Celcom’s 4G network after 3G sunset.

Two years ago, TM had signed an agreement whereby Celcom will provide TM with 4G domestic roaming and (Multi-Operator Core Network) services for a period of 3 years. However, this approach might present a tricky situation for its current postpaid and prepaid plans.

Unless you’re on the Unifi Mobile 99 plan with unlimited data, most of the postpaid and prepaid options come with a data quota split between 4G and 4G/3G. Obviously, you get more data if you’re on TM’s 4G network and if you do roam onto Celcom, you will utilise a separate bucket for it. Even the current RM35 monthly unlimited plan for #Bebas Prepaid is only applicable for LTE data.

If Unifi Mobile users are allowed to roam onto Celcom’s 4G network, it would be harder for users to know whether they are on a home or domestic roaming network. It would be better for consumers if TM revises its Unifi Mobile plans and do away with the complicated data split. With less than 6 months left in the year, we expect TM to provide more details closer to the 3G shutdown.

To migrate users who are still using 3G or non-VOLTE devices, Unifi is running a campaign where you can get a RM50 Lazada voucher to buy a new 4G phone. TM has sent an EDM to the first 660 selected customers and they can redeem the RM50 voucher by filling up a form. This campaign is running from 24th June until 31st December 2021.