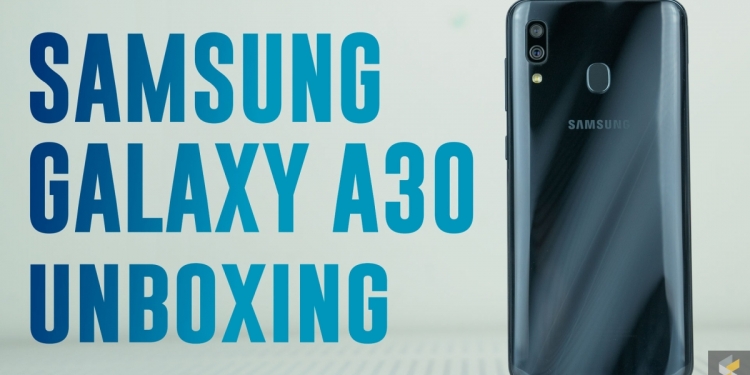 Samsung has recently launched a bunch of mid-range smartphones in Malaysia. There’s the Galaxy M20, the Galaxy A50 and of course, the Galaxy A30. Since we have a unit of the Galaxy A30 in our office, let’s take a look at what’s inside the box!

Once you’ve open the box, you will be greeted with a smaller box that comes with a clear silicon case and a bunch of paperworks.

Underneath the box, you will find the Galaxy A30 itself, which I will talk about it later.

And at the bottom you will find a 15W charging brick, a headphones and a USB-C cable.

You will also find a sim ejector tool at the bottom of the box.

At the back you will find a glossy body that’s made from curved “3D Glasstic”, and that basically means that the back is made out from the combination of glass and plastic.

It also has a dual camera setup that consist of a 16MP main camera and a 5MP ultra-wide angle lens. And unlike the more expensive Galaxy A50, the Galaxy A30 gets a rear-mounted fingerprint scanner.

Powering the device is an Exynos 7904 processor that’s mated to 4GB RAM and 64GB of internal storage. But if that’s not enough, you can always expand for more via a microSD card.

The A30 also runs on Android 9 Pie with One UI on top which is a nice thing. It has a brand new set of icons now but the company has redesigned most of its in-built apps by making them easier to use with just one hand, since most of Samsung’s devices these days are quite large.

Keeping the lights on is a 4,000mAh battery with support of 15W fast charging via USB-C.

But sadly in Malaysia, the Galaxy A30 does not come with support for Samsung Pay. For those of you who didn’t know, this the company’s mobile payment system. Even the more expensive Galaxy A50 does not have it.

The Samsung Galaxy A30 is officially priced at RM799. For the same amount of money, you can also get the Galaxy M20.

The difference between the two is that the Galaxy M20 gets a larger 5,000mAh battery, which is a plus for those who does not have the access to a charging point throughout the day.

However, it has a smaller 6.3″ LCD display. But they do share some similarities, both of these devices shares the, same processor, the same amount of RAM and internal storage.

But if you are willing to fork out an extra RM400, there’s also the Galaxy A50. The difference between the two is that the A50 gets an in-display fingerprint scanner and a more capable  Exynos 9610 processor. It also has a triple camera setup that consist of a 25MP main cam, 8MP ultra-wide cam and a 5MP lens for depth effects. It also have a 25MP camera for selfies.

But other than that, they are pretty much similar, they have the same display and the same battery capacity.

So which smartphone will you go for? The A30 or the A50? Let us know in the comments below.