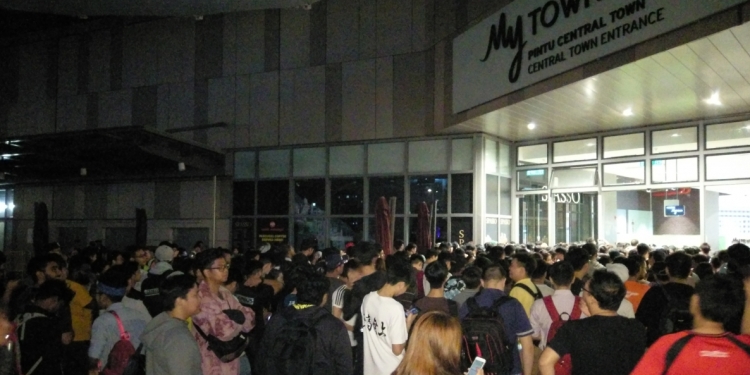 If there was one big event this weekend for Malaysian Apple fans, it would be the Switch warehouse clearance sale. And, as with all Apple clearance sales, we knew that there would be a line. But we didn’t think the line would be THIS LONG.

The queue stretches from the entrance of MyTown all the way to the outside by the side of the main road as you can see from these photographs: Our contact on the ground estimates about 300-400 people in attendance queuing up at two separate entrances to the Cheras mall. The Central Town Entrance (next to Starbucks) looks the scariest, with a huge mob just crowded in front of it with no real line in sight at the time of this writing.

There is also a second line next to H&M which looks a lot more organised. Reportedly, people began queuing up at MyTown since midnight last night despite the fact that Switch explicitly stated that no midnight queue was allowed. I guess you can’t really stop people from queuing up for something. We even spotted foldable beds of some sort which is a strong indication of overnight queuing.

Some netizens have also taken to Twitter, expressing concerns of a potential fight breaking out because there are allegedly people cutting queues.

Switch’s latest tweet says that MyTown management has pushed the queue back to the Grab station at Ikea because of safety concerns.

Dear customers, due to safety concern, MyTown mall management had instructed the queue to start at Grab station Ikea. We apologized for any inconvenience cause.

Your safety is our priority.

In any case, if you’re there or planning to head there to queue up, please be careful and be courteous to one another. Most importantly, stay safe, people. We’ll continue to update this post if we hear anything new.

UPDATE: Switch has postponed its clearance sale until further notice. The Switch store at MyTOWN will resume operations in the weekend, however, they will still continue with their on going promo for the MacBook Air 11”, iPhone 6 (32GB) Gold and iPhone X 64GB/256GB.