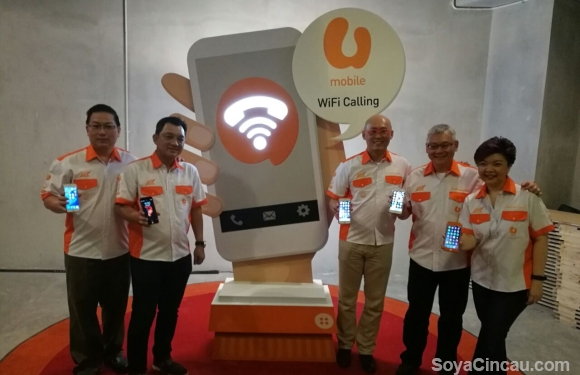 U Mobile is officially the first telco in Malaysia to roll out WiFi Calling — the service that lets you make phone calls even when you have no signal bars.

WiFi Calling or VoWiFi basically a service that lets you make phone calls and receive SMS over a WiFi connection instead of your mobile line. This means that even in highly congested areas or high-rise buildings where mobile connectivity is poor, you can still enjoy seamless phone call connections as long as WiFi is available.

That means, even if you’re travelling overseas, all calls you make to a Malaysian number will be charged standard domestic rates. So, if you’re on a U Mobile P70 plan, all your calls to Malaysian numbers — regardless of where you are — will be free, provided you’re on WiFi.

If you want to know more about WiFi Calling, you can check out our detailed post about it here.

For now, U Mobile’s WiFi Calling service is only available for the iPhone 5C, 5S, SE, 6, 6 Plus, 6s and 6s Plus smartphones on iOS 9.3 and above. However, the orange telco has said that they’re planning to roll out this service for Android users in Q3 of 2016. The good news is that this service will be available for both prepaid and postpaid lines.

WiFi Calling is off by default so you will have to switch it on yourselves in the settings menu. Don’t know how to do that? Check out our step-by-step tutorial on how to switch it on.

U Mobile’s WiFi Calling service will also be on High Definition Voice. As long as both parties’ smartphones have support for HD Voice, you will be able to enjoy crisp call audio too.

We honestly think that this is a fantastic move by U Mobile. One of their biggest weaknesses in the past was limited network coverage (compared to the other telcos) especially in locations outside of city centres. With WiFi Calling, they’ve not only shored up that weakness but they’ve also gained an advantage over the other telcos especially in high-rise buildings, offices, commercial areas and in underground locations as long as they have WiFi connectivity.

For more information on this service, head on over to U Mobile’s website.