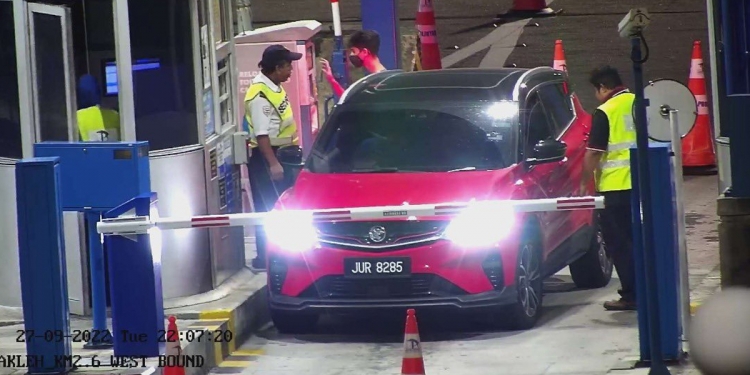 If you live and drive around in Klang Valley long enough, chances are you’ve encountered a car at the toll booth tailgating you so that they can avoid having to pay the toll fees. However, toll operators aren’t about to let these people go off the hook easy it seems, with highway operator Prolintas now clamping down on toll evaders on the Ampang – Kuala Lumpur Elevated Highway.

In fact, after having caught one Proton X50 in the act, they would even post about it on the official Prolintas AKLEH Twitter page to warn other potential toll evaders, complete with the hashtag #kantoi.

According to Prolintas, after having caught the Proton X50 at the Dato Keramat toll plaza at roughly 10.07pm last Tuesday, they then found that it had a total of RM57.50 in toll arrears. The driver then paid the full amount owed at the same place and time. The highway operator added that they will continue to actively watch for toll evaders on their highways to apprehend other irresponsible drivers.

That being said, not being publicly humiliated on social media probably shouldn’t be the only reason to not skip paying the toll fee. Those caught tailgating and evading tolls will be breaking a number of rules. First off, simply tailgating the car in front at the toll booth might be enough to be considered an offence under Sections 42 and 43 of the Road Traffic Act 1987, which punishes anyone driving in a reckless, dangerous or careless and inconsiderate manner. This can lead to a jail time of up to five years and/or a fine of up to RM15,000.

Similarly, you could also be guilty under Section 279 of the Penal Code, which punishes rash driving that could harm others with up to six months of jail time and/or a fine of up to RM2,000. Evading the toll itself meanwhile could land you in court under Section 8 of the Federal Roads (Private Management) Act 1984, which can lead to a fine of up to RM5,000 if found guilty.