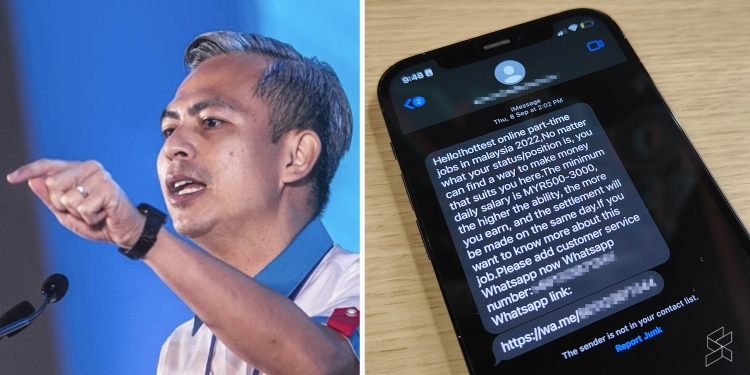 Scams are becoming a hot topic these days, as unscrupulous parties are finding new ways to swindle unsuspecting individuals of their hard-earned money. This is obviously distressing for a lot of people, so yesterday, Lembah Pantai MP Fahmi Fadzil held a press conference in support of scam victims.

Following the event, the opposition lawmaker and PKR information chief took to Twitter to outline the key takeaways, saying that an average of 20,000 people become scam victims every year, resulting in over RM660 million stolen.

He added that bank users do have a responsibility to be vigilant in avoiding scams, such as not clicking on links from unknown sources and only downloading apps from the Apple App Store, Google Play Store and Huawei App Gallery. However, he did call out the ruling government for not taking steps to reduce the number of scam cases in the country.

“The government as well as banks have a moral obligation to take proactive action, as these scammers’ crimes are based on malicious fraud or impersonation,” Fahmi said, going on to list seven steps these entities can take to prevent scams and help victims.

According to the MP, the centre should have at least three locations, including Kuala Lumpur, Kota Kinabalu dan Kuching. He also urged BNM to create a multi-agency anti-scammer coordination centre based at its headquarters.

Another suggestion that Fahmi has is for financial institutions to stop using SMS-based one-time passwords for online banking verification, in favour of more secure and reliable methods. He specifically highlighted the implementation of two-factor verification, using only the devices the user has registered with the bank.

Fahmi also wants banks and other institutions to make phone calls to the user to authorise large or repeated transactions, as well as for any unusual bank account activity.

To compensate scam victims, Fahmi suggested the setting up of a ‘recovery fund’, as is being pursued by the Monetary Authority of Singapore (MAS), the island republic’s central bank. He said that this way, confirmed victims will receive the best compensation possible.

A framework was supposed to be published within three months but is “taking longer than expected” due to the complexity of the issues and the importance of ensuring the loss-sharing incentivises all key parties to be vigilant against scams.

One of the most prevalent methods scam artists use to trick people is to make calls posing as bank employees, so Fahmi urged telcos and the MCMC to create public service announcements (PSAs) educating citizens on the kinds of scripted dialogue employed by these scammers. This way, scam targets will know how to recognise these calls and ignore them, he said.

Force banks to include scams in annual reports

To get banks and other financial institutions to shoulder some of the responsibility of protecting users from scams, Fahmi suggested these firms be mandated to include the number of scam cases they are involved in – and the amount of money stolen – into their annual reports.

He said this measure will let shareholders and the greater public understand whether their bank or e-wallet is doing enough to prevent scams and help them make the right decision when it comes to their savings.

Financial institutions aren’t the only organisations Fahmi is targeting – he has also urged the government to hold discussions with social media platforms that often get abused by scam artists, in order to take immediate action to prevent such occurrences from happening again.

One of the platforms known for letting scams run rampant online is Facebook, which continues to approve ads without performing basic checks, apparently prioritising revenues over user safety. Worse still, the company appears to be ignoring user reports on spam, and even when the Ministry of Health stepped in to deny endorsing a brand of diabetic medicine in May, it took days for the platform to take down the offending ad. We’ve written about this issue before, and you can read about it here.

Collaborate with Interpol to prosecute scammers

So, what do you think of Fahmi’s suggestions? Do you think these steps will be enough to help reduce the number of scam cases? Sound off in the comments below.