SmartTAG maker claims IR tech is 10,000 times faster than RFID, but is it true? 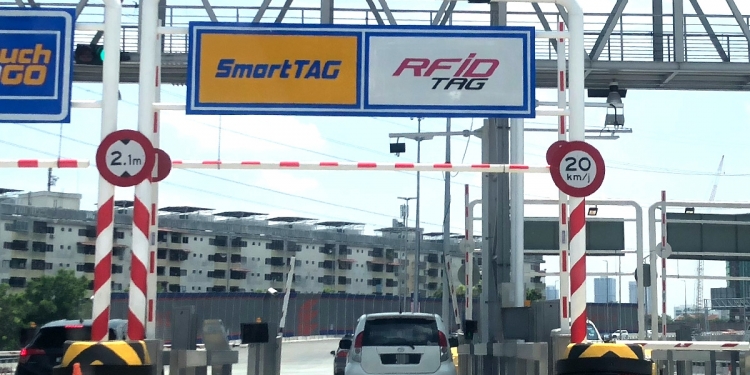 As announced recently, all highways on the west coast of Peninsular Malaysia will be RFID enabled from 15 January 2022 with the aim to implement Multi-Lane-Free-Flow (MLFF) by 2026. The government also plans to phase out Touch ‘n Go card and SmartTAG use by the end of 2023 and the existing lanes will be converted to RFID in stages according to demand.

With SmartTAG days being numbered, its maker Efkon Asia claims that SmartTAG’s IR technology is significantly faster and can speed up the implementation of MLFF. He argued that highway authorities and concessionaires should be increasing rather than reducing SmartTAG lanes if the objective was to reduce congestion.

In case you didn’t know, Efkon Asia is an Austrian technology provider of infra-red toll collection systems which includes SmartTAG which was implemented locally since 2005. After PLUS and Touch ‘n Go have stopped selling SmartTAG devices in 2018, Efkon continued to sell compatible devices such as MaxTag and E-Tag. The company is also behind LokaTag, the built-in SmartTAG device for vehicles.

Efkon Asia director Helmuth Blasch said the current system that uses Touch ‘n Go cards and SmartTAG readers have a combined user base of 5 million users and growing. He claimed around 75% of 270,000 new passenger vehicles registered in Peninsular Malaysia until September 2021 were delivered with SmartTAG compatible built-in toll reader or portable device. This he said is a clear indication that IR technology still enjoys the confidence of vehicle manufacturers, retailers and owners, and it’s proven to be efficient, convenient and cost-effective.

He said SmartTAG, an infra-red-based technology, is the ideal and much more advanced staging point to achieve a congestion-free highway objective outline in the Intelligent Transport System (ITS) Blueprint compared to Radio Frequency Identification (RFID) payment system.

IR device said to be capable of transferring data 10,000 faster than RFID

Although most countries have adopted RFID for barrier-free electronic payment systems, he shared that the Nationwide Truck Tolling System in Germany still uses IR technology similar to Malaysia for their MLFF configuration. He said the system is capable of handling over 2 million trucks travelling at up to 100km/h.

Blasch said their current SmartTAG compatible units comply with the DSRC (Dedicated Short-Range Communication) standards and are ECE R10 certified. The devices operate in the 400THz band and are said to be capable of transferring data 10,000 times faster than RFID. He explained being a battery-powered device, each unit is always active with a wake-up time of just 2ms versus passive RFID’s 45ms.

Efkon Asia also shared that the SmartTAG compatible devices are continuously being upgraded. Blasch said the new MaxTAG now comes with longer-lasting rechargeable 1,000mAh batteries which can be charged via USB. To improve SmartTAG performance, they are also offering lane-side antennas at subsidised cost. The company also plans to digitalise the SmartTAG experience in Q1 2022 but introducing Bluetooth connection between the reader and smartphones as well as in-car media systems. He also added that it is possible for direct connection to eWallets for easy top-ups.

SmartTAG versus RFID, which is faster to process?

To recap, RFID in Malaysia uses a sticker that costs RM35 which you attach to the vehicle’s windscreen or headlamp. At the moment, it is linked only to Touch ‘n Go eWallet but there are plans for an open payment system where you charge your toll directly to your credit or debit card. Unlike SmartTAG, there’s no need to change batteries and you don’t need to top up the card manually. Since it is linked to your eWallet, you can set it to auto-reload when your balance drops below a pre-set amount. On top of that, there’s no extra processing fee for reloads and you can even link up to 10 RFID tags to a single TNG eWallet account.

With the introduction of RFID, there are still concerns from the highway users who are comfortable with the existing Touch ‘n Go card and SmartTAG payment systems. One of the factors is the ease of using your own TNG card if you’re sharing or renting a vehicle from a friend. These concerns should be addressed over time as there are various RFID solutions adopted by various highways worldwide.

While IR has its own potential and benefits, the limiting factor at the moment is the infrastructure support. There hasn’t been much progress on SmartTAG payment channels as it still relies on the physical Touch ‘n Go card. Although it is possible to improve IR performance with more antennas, the question is whether or not highway operators are willing to make the investment considering the government and highway authorities has decided to use RFID for its MLFF adoption.

The government also plans to phase out TNG physical cards for toll payments in 2023 as the industry moves towards online based platforms such as eWallet and card payments which are more secure. Besides paying for toll, Touch ‘n Go already has plans to extend RFID usage to more applications which include RFID Fuelling, Parking and Drive-Thru payments.

SmartTAG maker claims IR tech is 10,000 times faster than RFID, but is it true?