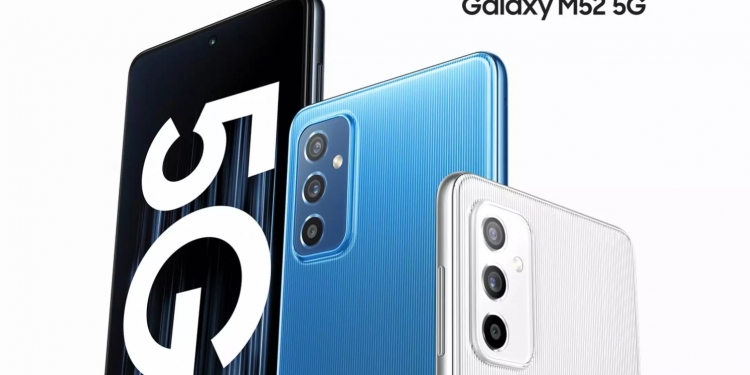 Samsung has quietly introduced the Galaxy M52 5G in Malaysia. This is Samsung’s new mid-range 5G smartphone and it looks like a watered-down version of the Samsung Galaxy A52s 5G.

The Samsung Galaxy M52 5G with 8GB RAM and 128GB storage is officially priced at RM1,699 in Malaysia. It is now available for purchase at the official Samsung store on Lazada and comes in either Black or Blue. During the upcoming 11.11 sale, the device will be offered for as low as RM1,399, which is RM300 off.

The Samsung Galaxy M52 5G was officially launched in India last month and it packs decent upper-midrange hardware at a lower price point. Upfront, it has a 6.7″ Full HD+ Super AMOLED Plus display that pushes a high 120Hz refresh rate. The device runs on a 6nm Qualcomm Snapdragon 778G that can be configured with up to 8GB of RAM and 128GB of storage. If you need more storage, it supports microSD card expansion up to 1TB.

If you need more RAM, the device supports Samsung’s RAM Plus feature, which converts the phone’s internal memory to provide up to 4GB of extra virtual RAM. The device also has a Game Booster mode which optimises the device’s hardware to offer optimal performance, battery life, and temperature while gaming.

In the camera department, the Galaxy M52 5G gets a triple-camera setup at the rear which consists of a 64MP main camera, 12MP ultra-wide-angle shooter, and a 5MP macro camera. For selfies, the tiny punch-hole on the screen houses a 32MP front camera.

Powering the device is a large 5,000mAh battery and it supports 25W fast charging via USB-C. The phone doesn’t come with stereo speakers but it does support Dolby Atmos when you connect it to a stereo headset or Bluetooth speakers. Although it has an AMOLED display, the device uses a side-mounted fingerprint sensor and oddly, there’s no 3.5mm headphone jack.

If you’re looking for a new Samsung phone with double the storage, IP67-rated dust and water resistance, a headphone jack and stereo speakers, you can consider topping up more and jump to the Galaxy A52s 5G which retails for RM1,899. The downside is that the screen on the A52s 5G is slightly smaller at 6.5″ and it has a lower battery capacity of 4,500mAh.