According to new reports, Google has announced changes to the way it handles the unique device identifiers that allows marketers to track users on Android. An update later this year will prevent access to your personal ‘advertising ID’, even after you’ve opted out of it. Instead, developers trying to access it will get ‘a string of zeros’ in its place.

As a recap, you’ve always been able to opt out of ads on Android. To do so, you can go into the Settings app on your phone, go to the Google menu, and hit Ads. You should then see the option to opt out of Ads.

That being said, this never really did stop app developers from accessing your phone’s advertising ID. Apps could still get your advertising ID under other purposes such as analytics and fraud prevention – that is, until later this year when Google patches it out.

“As part of Google Play services update in late 2021, the advertising ID will be removed when a user opts out of personalization using advertising ID in Android Settings. Any attempts to access the identifier will receive a string of zeros instead of the identifier,” – Google

According to Google, they hope that this will give users more control over their data, while also helping improve security and privacy. Google Play Services will also detect apps that currently have access to your unique advertising ID and notify them to delete the data where necessary.

Google’s actions comes just months after Apple introduced the App Tracking Transparency policy in iOS 14.5. Of course, before iOS 14.5, iPhone users could still opt out of ad trackers. However, with this update Apple made that option a lot more obvious, making apps send out a prompt to users asking for permission to track their data for advertising purposes.

If you select ‘Allow’, it essentially does nothing different than before. But if you select ‘Ask App Not to Track’ it prevents the app developer from tracking the user through the app. You might have heard about this back when Facebook made a fuss about it, claiming that this would hurt websites that rely on targeted ads; it’s also perhaps important to note that it could potentially hurt part of Facebook’s ad revenue too.

Going back to the Google update though, the new update will come in several phases, with Android 12 devices getting it the earliest, with an expected arrival date of ‘late 2021’. As for everyone else with Android, you should be getting this update by early of next year. For more info about the upcoming changes, you can check out their updated support page here. 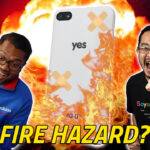