This is the Motorola RAZR with a foldable display 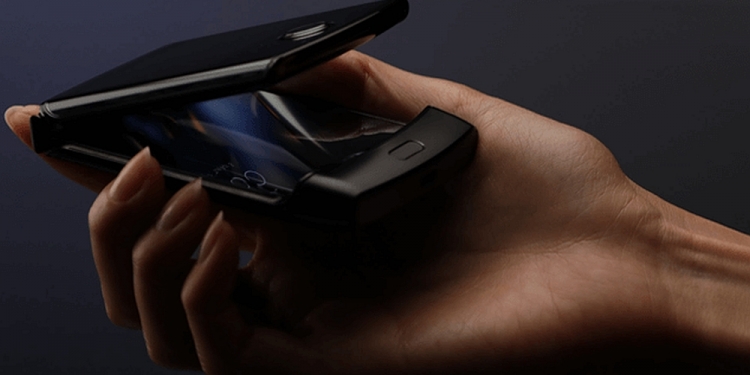 Motorola is revealing its new RAZR smartphone next month and it’s going to be a flip-phone with a foldable display on the inside. After years of anticipation and speculation, we now get a legit look at the device thanks to a leaked image from serial leakster @evleaks.

From the image above, we can see that the new RAZR has no physical keypads on the inside. There’s a thick chin at the bottom which is carried over from the original RAZR V3. But if you look closely, there’s a button on the chin which is likely to be a release mechanism to unfold the phone.

Although we can’t see the front cover entirely, there’s a noticeable camera bump on the outside which is highly likely to be its main camera. The hinge looks similar to the device that shown in a recent teaser.

Apart from the image, Evan Blass has also dropped the new RAZR logo. This is identical to the earlier leak which we saw sometime in April this year. If the Galaxy Fold is too big to hold in a single hand, the new RAZR throwback device looks like a better alternative.

The new flip-phone is rumoured to come with a 6.2″ flexible display with a tall 22:9 aspect ratio. Under the hood, it is expected to run on a mid-range Snapdragon 710 processor with either 4GB or 6GB of RAM. To maintain a slim profile, it is speculated to come with a rather modest 2,730mAh battery and it supports 27W Turbo Power fast charging.

The new foldable device is expected to be priced around USD 1,500 (about RM6,268) which is lower than the Galaxy Fold. However, the Galaxy Fold is significantly superior in hardware as it has a larger tablet-like display, a Snapdragon 855 processor, 12GB of RAM and a huge 512GB of storage. Samsung also has plans to develop a similar flip-phone as they have recently unveiled a new foldable concept that folds like the RAZR.

The new Motorola device will be announced on 13 November in Los Angeles. If you’re a RAZR fan, do you like what you see? Let us know in the comments below.

This is the Motorola RAZR with a foldable display