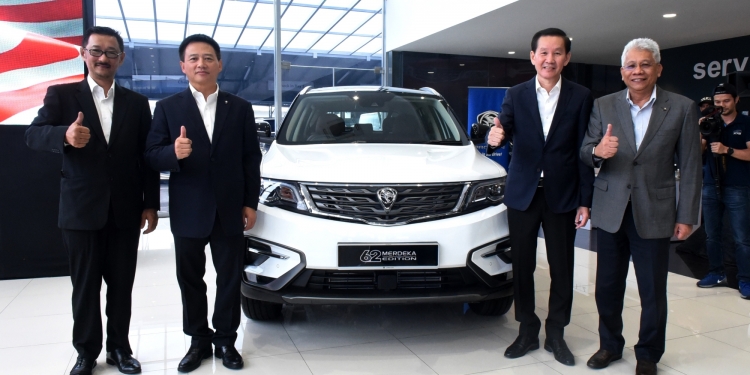 In conjunction with the 62nd Merdeka celebration, Proton has launched its X70 Merdeka Edition. Only 62 units of the SUV will be produced and it’s available in either snow-white or flame red.

The Proton X70 Merdeka Edition is offered exclusively as a Premium variant and it’s priced at RM126,100. As a reference, the Premium X70 2WD model is officially priced at RM123,800.

For the extra RM2,300, the Merdeka Edition gets a Quartz Black paint job on the roof and A-pillar, additional door visors and a scuff plate added on the rear bumper. The car also gets a customised Merdeka Edition emblem on the tailgate.

On the inside, the special edition vehicle gets new mats for the floor and the trunk. There’s also a “62 Merdeka Edition” emblem added on the inside which carries a unique number. Like the current Premium variant, the vehicle also gets Nappa leather seats, panoramic sunroof and Advanced Driver Assistance Systems (ADAS) as standard.

The rest of the vehicle remains unchanged and it is still a 2WD vehicle running on a 1.8L TGDi engine with a 6-speed automatic transmission. You also get an 8″ infotainment system with voice command and 4G WiFi hotspot.

Proton CEO, Dr. Li Chunrong, said: “The Proton X70 Merdeka Edition was born out of PROTON’s desire to celebrate Malaysia’s Merdeka anniversary month. We are extremely thankful for the support Malaysian car buyers and the Malaysian government has shown to PROTON, so this is the Company’s way of creating a special version of the Proton X70 as a small gesture of thanks to all Malaysians.”