I don’t believe anything is more frustrating for a content creator, working with videos and photos, than having your SD card die on you. Well, maybe when Adobe’s Premiere Pro freezes on you before you’ve saved after a 5-hour edit session, but I think that still takes second place to a dead SD card.

The good news is, Sony understands that. In a world full of fragile electronic devices that hold our entire life, the company has unveiled their brand new SD card whose name leaves very little to the imagination.

I mean, it’s an SD card that’s designed to be durable enough to survive the outdoors, so obviously they’re going to name it Tough. Well, actually they’re calling it the “SF-G series TOUGH specification”, but if you put emblazon TOUGH on the front of your SD card in black font over a yellow background, you can bet everyone’s just going to call it the Tough SD card.

In any case, Sony’s new SD card certainly seems to live up to its name. They claim that this tiny little card is bend proof up to 180N (which makes it 18X stronger than a normal SD card) and can survive a drop of up to 5 metres. This level of durability is thanks to the SD card’s new ribless design and monolithic structure. While those words sound cool, what they actually mean is that Sony’s constructed this SD card with what they call “materials of high-grade hardness” in a single piece mould with no empty space in the card. Its ribless design also means there are no “teeth” on card so it won’t break when bent. However, because there’s no space, you also lose the write protection switch. But that’s not all. The Tough SD card is also IP68 dust and water resistant so it should survive about as long as your Samsung Galaxy S9 when the going gets wet.

Of course, toughness would be nothing if this card was slow. And thankfully it isn’t, because the new Tough SD card has read and write speeds of 300MB/s and 299MB/s respectively. In fact, this card also supports the V90 video speed class. 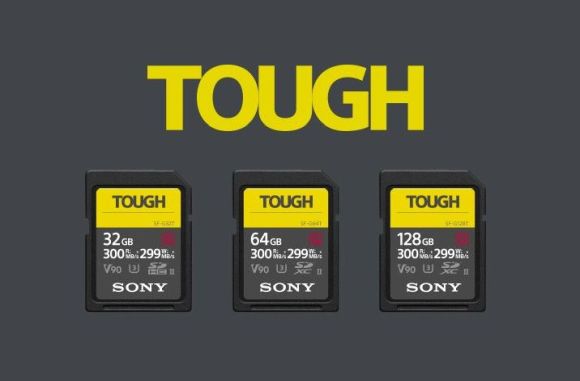 Sony Malaysia says that this SD card will launch in Asia from October onward though no exact details nor price have been given about a Malaysian launch. The company says that the SD card will be available in three sizes — 32GB, 64GB and 128GB — and will be priced at USD72.99 (around RM302), USD131.99 (around RM547) and USD275.99 (around RM1,143) respectively.

That’s a lot of money for something the size of two and a quarter average thumbnails. But, it will probably survive the outdoors better than I do.