The OPPO Find X Lamborghini Edition is their most premium offering yet and it also has the world’s fastest charging technology. While it’s mainly the same device as the standard OPPO Find X, the Lamborghini special edition gets a dark carbon-fibre pattern underneath its 3D glass back. On top of that, the Lamborghini logo at the rear is engraved with a suspended 3D effect which gives it a floating illusion when viewed from various angles. For a premium unboxing experience, it also gets a special packaging that’s different from the mainstream model. The box and charging cable come in striking bright yellow which is inspired from the Aventador. Even the charging brick has a Lamborghini logo on it.

Since Lamborghini is often associated with speed, OPPO is finally introducing its Super VOOC charging technology on this special edition premium device. This is a huge upgrade of its current VOOC Flash Charge technology that pushes up to 20W power with its 5V4A brick The Find X Lamborghini Edition comes with a 3,400mAh battery and it will take 220 minutes to charge on a standard 5V 1A brick, while a common 5V 2A charger takes 135 minutes.

With the current VOOC Flash charge, it takes just 90 minutes to charge from 0-100% but the new Super VOOC is able to fully charge the device in just 35 minutes. That’s a staggering 61% faster as it pushes 50W with its new 10V 5A charger. It is interesting to point out that OPPO’s decision to use 10V contradicts with its Super VOOC showcase in 2016. During that demo, they have claimed that Super VOOC’s low 5V voltage is a key differentiator as other charging technologies from Qualcomm and MediaTek were pushing for higher voltage to reduce charging time. OPPO has mentioned that lower voltage not only offers lower temperature but it is also safe to use your phone while charging. 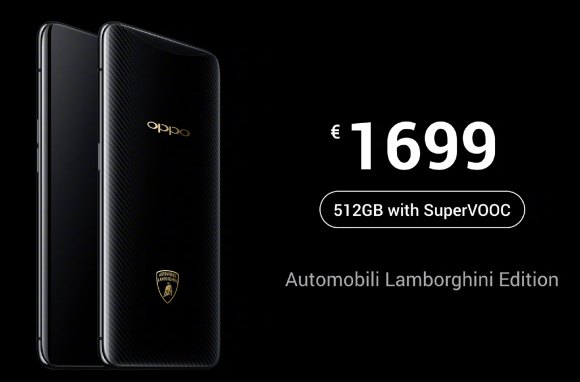 If money is no object, would you get the OPPO Find X Lamborghini or the Porsche Design Mate RS? Let us know in the comments below.