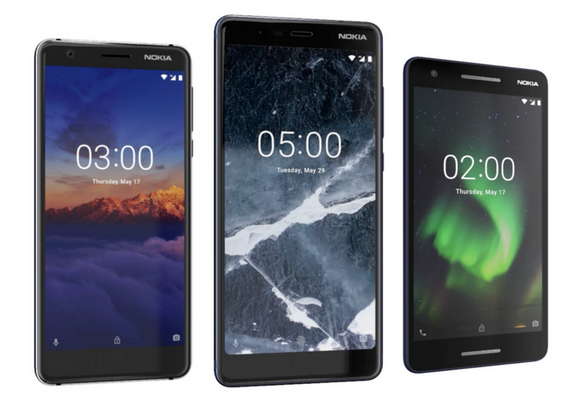 HMD Global has done a great job in creating solid smartphones for Nokia; for instance the Nokia X6. This time around, they have announced new refined models for the Nokia 2, Nokia 3 &  Nokia 5.

Nokia has made it simple enough for others to identify their latest generation of models by adding .1 to the name. Nokia 2.1 might be a budget smartphone, but it has a couple of notable features. First of all, it has front-firing stereo speakers which are quite rare for an entry-level smartphone.

It offers a 5.5-inch HD display and it runs on a Qualcomm Snapdragon 425 processor with 1GB RAM and 8GB of storage that’s expandable via microSD. The Nokia 2.1 will run on Android 8.1 Oreo (Go Edition) which is light version of Android that is designed for smartphones with 1GB RAM or less, giving you a smooth Android experience while consuming less storage and data. Despite being a budget device, it gets a large battery capacity of 4,000mAh that’s rated to last up to 2 days on a single charge. For people that value long battery life, the Nokia 2.1 might be worth considering. Aside from that, it still has a decent 8MP rear camera and a 5MP front shooter.

The Nokia 2.1 is the cheapest among the three at 115USD (Around RM458) and it will be available starting July 2018. It comes in 3 colour options – Blue/Copper, Blue/Silver and Grey/Silver. Compared to its predecessor, the Nokia 3, they have bumped the rear camera from 8MP to 13MP and retains an 8MP front camera. It runs on Android 8.1 Oreo and has a battery capacity of 2,990mAh. Last but not least the Nokia 5.1. This handset features a slightly bigger screen than its predecessor. It has a 5.5″ display that pushes a full HD+ resolution in an 18:9 aspect ratio. Instead of using Qualcomm Snapdragon series processor, it runs on a 2.0 GHz MediaTek Helio P18 octa-core processor which claims to be 40% faster than last year’s model.

The fingerprint sensor has been relocated to the back of the phone allowing you to unlock the phone easier with your index finger. It comes with a 16MP rear camera and an 8MP wide-angle front shooter. Out of the box, it runs on Andriod 8.1 Oreo and has a battery capacity of 3000mAh.

Both Nokia 5.1 and Nokia 3.1 are Android One devices and that means it is guaranteed to get three years of monthly security patches and two years of OS updates.

Currently, only the specs and international prices are mentioned but there are no specific dates announcing when will it arrive in Malaysia. What do you think of Nokia’s 2018 lineup? Let us know in the comments below.