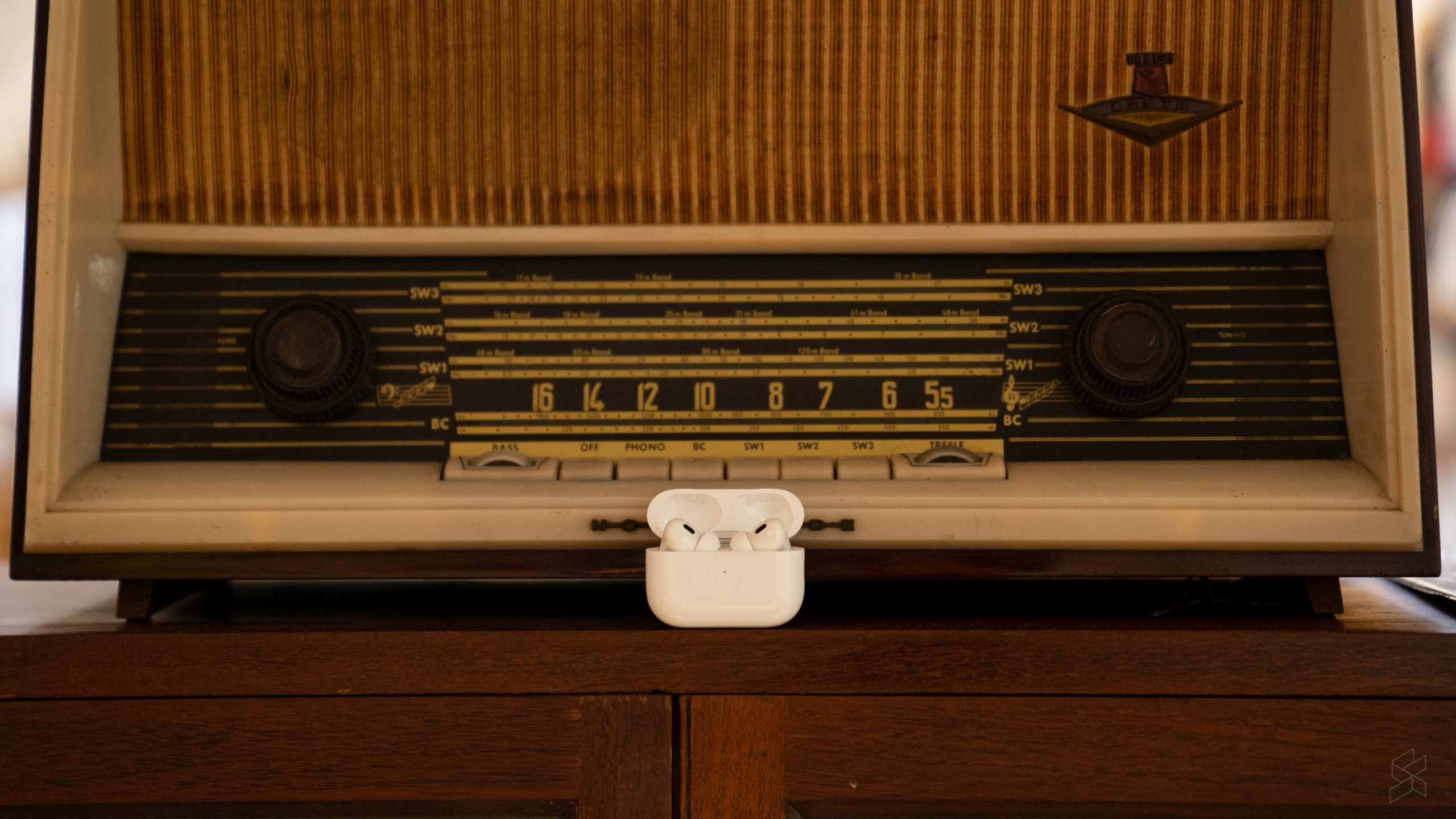 While I’ve always thought that the regular AirPods were head and shoulders above the competition in its class of hard-tipped half-in-ear TWS headphones, I don’t think I was ever as impressed with the AirPods Pro.

Truly, if you popped a pair of AirPods in your ears they just sounded like no other TWS headphones in their class—it’s staggering how much better the audio quality is. And that’s before considering the quality that its mic can offer compared to the competition.

But, with the AirPods Pro, the feeling wasn’t really the same. Don’t get me wrong, they’re good. They were just never quite that much better than the rest. It didn’t help that for three whole years, Apple neglected to update it. In that time, their main competitors at Samsung and Sony have pushed incredibly good products that I would take over the AirPods Pro any day of the week.

Now though, there’s a new Pro in town. And while it looks incredibly similar on the outside—which left me very skeptical—I’m happy to report that it is noticeably better. In fact, it might even be worth the upgrade.

To their credit, the AirPods Pro has always been one of the more comfortable TWS headphones to wear. I think that it’s mostly down to the fact that they just don’t sit quite as deep in your ear canal as most of the other soft-tipped in-ear headphones.

This makes it really easy to fit for people with tiny canals or, in my case, weirdly shaped ones. And the AirPods Pro 2 are no different. Perhaps to nobody’s surprise because the headphones look physically identical to the first-gen AirPods Pro, but its ability to stay in your ears for hours on end should not be understated.

I’m particularly happy with the fact that these headphones now come with an extra pair of eartips in the XS size. So now you get four different tip sizes including the Mediums that are attached to the headphones out of the box.

I feel like creating TWS headphones that fit the widest variety of ears through methods like more eartip sizes and materials is something that’s easy to overlook. So I’m happy to see Apple do it considering how adamant they’ve been about reducing the number of things they include in the box with their products.

The thing is, AirPods Pros have always been comfortable. What amplifies this strength is probably my favourite new upgrade on the new AirPods Pro 2.

It finally has some stamina

Six hours. These new AirPods Pro 2 have the update I think was most necessary from my time with the original AirPods Pro, and that’s the addition of an extra hour and a half of listening time with ANC.

You see, the original AirPods Pro was always on the bottom end of the battery life bin. The Sony WF-1000XM3 of the same generation was already lasting over five and a half hours with ANC turned on, which is more than an hour longer than Apple’s original ANC buds.

With the AirPods Pro 2, they level the playing field. In fact, in some senses I think they might have pulled ahead because while most of the headphones I’ve tested claim up to six hours, they realistically last around five to five and a half hours. Apple’s new AirPods Pro gave me about six to six hours and fifteen minutes on a single charge.

And I’ve been using them with either Active Noise Cancellation (ANC) or Transparency on.

Speaking of ANC and Transparency

If we’re talking about shoring up weaknesses though, I have to mention how much better the ANC on the new AirPods Pro 2 are. Its predecessor always felt a little weak even for its time. When Sony was launching boundary pushing ANC, the AirPods Pro’s ANC felt barely any better than the passive noise cancellation you’d get from something like a well-fitted Galaxy Buds.

With the new AirPods Pro 2 though, it has finally caught up with the competition. If I had to describe it, I’d say that it’s best at cutting out ambient background noise, or white noise. Droning from machinery, traffic, coffee shop chatter—the AirPods Pro 2 is excellent and cutting that out.

But, if there are sudden loud sounds, like a clap or a crash or just someone shouting, that gets through to your ears a little more than something like the Sony WF-1000XM3. I’m not sure if this is a good or bad thing, because it means you’re not completely isolated from the environment, but I have to say that I found it more useful—to keep an ear on any sudden changes in my surroundings—than distracting.

Where the AirPods Pro 2 pulls ahead of the competition though is with what it can do with Transparency. I’ve said this before that I thought the gold standard for this feature is the AirPods Max, and Apple has somehow managed to bring that experience into these tiny ones. OK, maybe 90% of the experience because you still sound funny when you speak thanks to the fact that these are stuffed in your ears.

However, everything around you sounds impressively natural. You can have full conversations with no issues so if you really wanted to leave these in your ears all day, you kind of can now. I think though, the most impressive thing is the new Adaptive Transparency.

Thanks to the new H2 chip in these headphones, the AirPods Pro 2 are able to pick up sudden loud sounds in Transparency and sort of lower the volume so they don’t hurt your ears. You’d think that this would only be useful for sirens or construction, but it’s actually very convenient when you’re having a conversation with people in the SoyaCincau offices.

Our videographer Izzy, for example, has a banshees’ cackle, but when I have these AirPods Pro 2 in, I can actually hear it dampen the sound of his laugh. It’s like adding a hard limiter to your real life—how effective this works is kind of unbelievable.

Then you consider how good they sound

I don’t think the AirPods Pro ever sounded bad. At least, not to my ears. I did think that they were a little soulless which made listening to music on them not particularly fun—and this is coming from someone who uses monitoring headphones recreationally.

I think the AirPods Pro 2 still sounds quite neutral in this respect, but it’s like everything is amped up a little bit. There seems to be more detail, more separation and just a nicer, fuller and more well-rounded sound.

In this case, the latter is definitely a yes. They sound a lot like the Galaxy Buds 2 Pro in my opinion, and that’s not a bad thing at all. It’s just not as fun as I would have liked. I can’t say for certain that it sounds noticeably better than the original AirPods Pro because it’s been a couple of years since I’ve had one of those in my ear. But I can tell you that if you want something detailed and full-bodied, this is right up there with the best of them.

Packed with the nuances that make it an Apple product

There are also a bunch of little things packed into the AirPods Pro 2 that drive home the fact that it’s an Apple product. Small things that you don’t even think about, like how you have to do basically zero setup to get it to work as intended.

For example, there’s no app that you need to install, though it will have access to more of its features if you use it with an iPhone. But then again, I don’t really use stuff like Spatial Audio so this doesn’t bother me.

The subtle new feature that I thought I’d enjoy more than I actually did was the volume control that’s been added to the stem. So now on top of squeezing it to control playback, you can also swipe on it upwards or downwards to adjust volume.

From my testing it only responds to single swipes, so there’s no swipe and hold to rapidly reduce volume, which means it works more like a button than anything. It’s useful, don’t get me wrong, but the control itself is just a little bit awkward to use.

A more natural way in my opinion could have been to have the swipe take place on the outside of the bud so it’s less of a squeeze for your fingers, but maybe it’s cheaper this way. Or less prone to accidental touches. Either way, it’s a nice addition, even if it’s not quite as good to use as I thought.

It’s the “default pair” if you own an iPhone.

I mean, are you even surprised? While I don’t think these are my absolute favourite headphones yet—I think the Galaxy Buds 2 Pro still edges them out in terms of design and fit—the AirPods Pro 2 definitely reclaimed the position of default TWS headphones if you’re an iPhone user. I just wish Apple took this opportunity to redesign this hideous thing.

But, I suppose this is kind of like an aesthetic at this point, having two little sticks sticking out of your ears, but I’m still not on board. What’s most befuddling though is why these don’t come in more colours.

Look at Samsung, they’ve got purples and blacks and even bronzes at some point, but Apple’s just stubbornly stuck to plain old white. Their iPhones are colourful. Their Macs are colourfull. Why is it that one of the most accessory-like products they make, don’t come in more colours?

I think that would have driven the demand for these through the roof, especially since the retail price is unchanged from the last generation, sitting at RM1,099. As it is, I already feel like the feature updates they’ve made to the 2nd Generation product are worth upgrading to from the original AirPods Pro. If they had made it also come with a new look—these’ll absolutely fly off the shelves.

Photography by Rory Lee on location at Jiak Kopi.