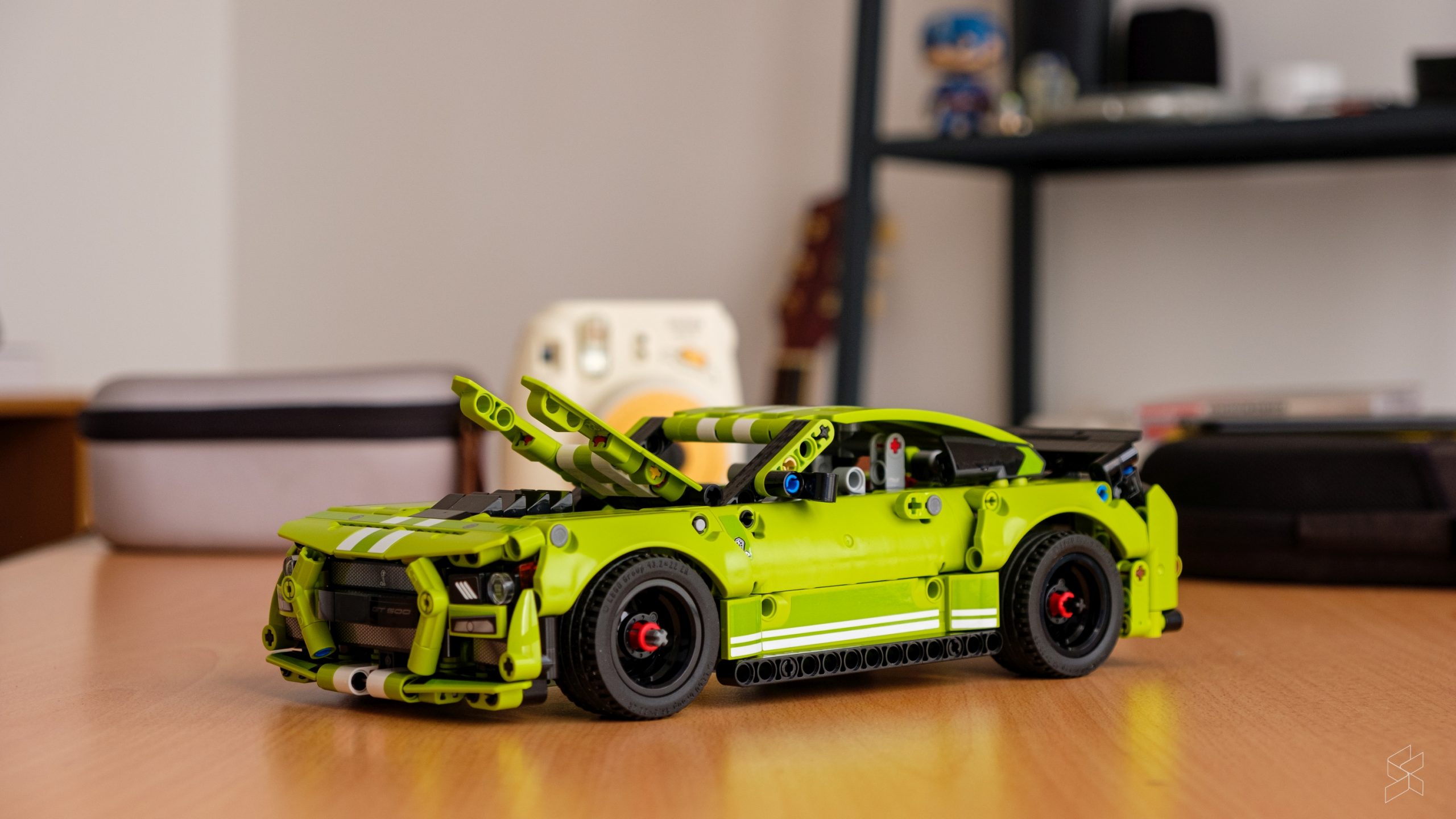 For some reason, Lego‘s Technic series of themed build sets was one of those adult toys I never really got into. I remember building with Lego bricks as a kid growing up, but as an adult with adult money, that passion didn’t continue. I mean, the idea sounds great, because it’s like an easier version of building scale models, but it just never stuck.

That changes today because this week I’ll be building my very first Lego Technic set, and it’s a new one of the Ford Mustang Shelby GT500 (42138). It has 544 pieces and is recommended for children aged 9 and older. Sounds right up my alley.

*NOTE: I, unfortunately, don’t have a whole lot of photos of the build process because I started this in the dead of night thinking I would just build a tiny part first, then continue it at a later time. But, before I knew it, hours had passed and I was already done with the model.

I have heard a lot of good things about the Lego Technic series. Every Lego enthusiast I ask goes on and on about the level of detail that’s included in these models. Duke even tells me that most of the cool things won’t be visible to those who didn’t build it…for some reason. I always thought the purpose of a model was to show off how intricate the piece is, but I digress.

When I opened the box, however, I have to say that I was a little underwhelmed. Having not built a Lego set before (the Chinese New Year one doesn’t count because it was a team effort), I had no concept of whether 544 pieces was a lot for a Lego set. In my mind it sounded like a lot, but holding all the pieces in my hands, it didn’t seem like a particularly massive project.

As I started building, the first thing I immediately appreciated was how detailed the instructions booklet was. Not only were the instructions clear and model diagrams accurate, but they even had 1:1 scale diagrams for the longer pieces so you knew whether you had the right piece. There was also a small progress bar at the bottom of the page to let you know how far into the build you were…in case the number of remaining pages wasn’t enough of a clear indicator.

My only criticism as a Lego noob would be the colour accuracy of some of the pieces depicted. Sometimes the white, grey and transparent pieces looked like each other in the booklet, so I constantly found myself double and triple checking if I had the right piece. But, I understand that colours printed on plastic and on paper will have some variance so I guess this isn’t something Lego can really fix.

But, if you follow the instructions diligently enough, you should have no issues completing the build.

The process was pretty straightforward. You start by building the “chassis” of the car first, before you added the parts that make it look like a vehicle, i.e., the doors, fenders hood and wing.

It was probably one of the most satisfying things to combine two big pieces that you were building separately together and suddenly be able to recognise which part of the car that makes. Now, I don’t want to spoil too much, but you do get a pretty big spoiler when you get into the second bag.

It took me about three and a half hours to finish the entire build, so it’s really not a long process at all even if you’re a Lego noob like me. The thing that probably took the longest time was finding the pieces I needed. It wasn’t until I was halfway done with the first bag that I realised that the pieces were packed according to size (big bag generally had the big parts, and the parts decreased in size as the packaging got smaller).

Now, the Lego Technic purists will probably dislike this particular set because, well, it’s honestly quite simple. Even as a Lego noob, I was quite disappointed with how little you could do with the model. Besides the wheels, the only thing that moves on this model is the hood. You can’t open the doors, nor can you pop the trunk. There isn’t an easy way to lift the roof either.

For context, the Creator Expert Ferrari F40 we have in the office has more moving parts and detailed anatomy than this Technic set.

But, that may be a good thing that the doors and stuff don’t open because there isn’t a massive amount of detail inside the car, on the dashboard, nor in the engine bay. If you start forcibly peeling back the layers, you start to see that this model really is meant more to be viewed with a more casual eye.

That’s not to say that there isn’t detail here, because there are a couple of nice bits. The headlamp assembly, for example, has way more pieces than I thought it would, and I think it looks pretty darn good. The fact that the wheels have an actual bead to mount the tyres, and the fact that the tyres also have sizing and tyre construction information written on the side was cool to me.

And if you’re feeling a little frisky, you can remove the diffuser and rear logo and stick in a release trigger. This is here because you can actually wind the car up and launch it like you would with a Happy Meal toy. I personally would have preferred a more detailed engine bay or cockpit to it having the ability to wind up, but I guess I’m not really the audience they’re targeting? I do appreciate how the release and locking mechanism was engineered, however.

At the end of the day, I think this Ford Mustang Shelby GT500 (42138) set definitely isn’t for the Lego Technic purist. Even I was a little unimpressed with the level of detail included, so if you’re an experienced builder, you might want to pass on this.

Though, if you look on Lego’s website, you might have already figured that out because rather than the adult-with-well-trimmed-beard model they had building the Land Rover Defender (42110), Porsche 911 RSR (42096), Ducati Panigale V4 R (42107) or Ferrari 488 GTE “AF Corse #51” (42125), the Mustang had two little children who were easily impressed with a simple AR demonstration.

But, as a first taste at what you can build with Lego Technic sets, I think the Mustang is a great place to start.

I didn’t expect it to be quite as meditative as it ended up being. I had a podcast on in the background and just lost myself in the build process. You don’t need much brain power because it’s just matching shapes. But, the most difficult part for me was probably the part where you have to stick the included stickers onto the parts. No matter how well I lined them up with my fingers, the moment they touched the plastic, it would find a way to be crooked.

It’s also one of the more affordable Technic sets, being priced at RM249.90, but there’s just enough detail and intricacy there to get you hooked. I know I was, and I’ve got my eye on that Bugatti Chiron (42083) and Lamborghini Sian FKP 37 (42115).