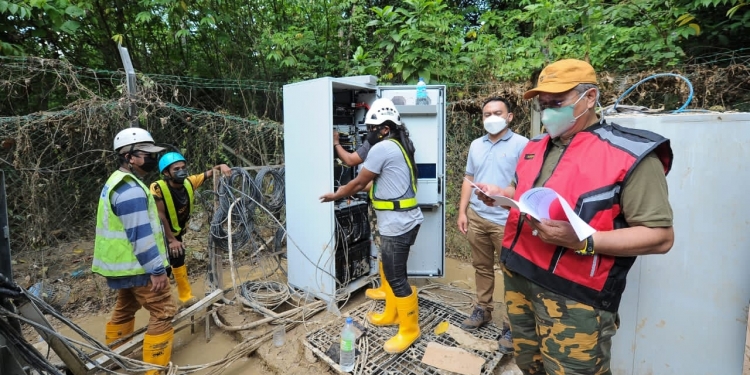 The recent devastating floods which hit several states in Malaysia have also disrupted telecommunications services. A total of 1,028 mobile towers were affected which caused difficulty for flood victims to communicate. Most of these sites were down because of power outages or damaged equipment due to rising water levels.

To mitigate such problems in the future, the Communications and Multimedia Ministry has suggested building higher platforms of around 3 metres for towers affected by the recent floods. He said this is to reduce damage to telco towers and to ensure that communications would not be cut off in the event of a disaster. Minister Tan Sri Annuar Musa has asked the Malaysian Communications and Multimedia Commission (MCMC) to take the initiative to ensure telco towers at flood-prone areas would not have equipment at the ground level in the future.

Annuar Musa said communications should not be cut off even if water rises to 10 feet or even after floods recede. He said even those who are trapped on the rooftops of their houses should be able to call for help.

It should be noted while a raised platform would help to protect equipment from damage, a redundant power supply is also required. The full restoration for affected telco towers took longer than expected as several sites were down due to power supply issues. According to Tenaga Nasional Berhad, works to restore electricity supply are still in progress and there are still several locations without electricity in Johor, Negeri Sembilan, and Melaka as of 10pm this evening.

Annuar Musa also wanted the relevant parties including the Information Department and Department of Broadcasting to come out with a more effective information delivery system in flood-prone areas including early warnings. He said the current conventional methods such as Info on Wheels, which is essentially vehicles with loud hailers, are quite limited.

He said in Japan, every mobile user including tourists will receive a message alert when an earthquake is about to happen. After what Malaysia went through, he wants a better system where information can reach every user exposed to disasters wherever they are.