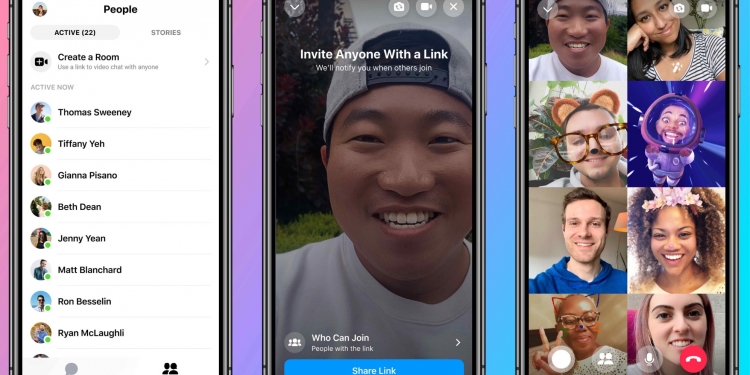 Facebook is introducing a wide array of new features to help you keep connected with your friends and family, including a new video call feature that reminds us of Zoom a little too much. These new features are in response to video calls on Messenger and WhatsApp more than doubled, and views of Facebook Live and Instagram Live videos increased significantly in March due to social distancing practices all around the world.

The new updates on Facebook, and the other companies under them (Whatsapp, Instagram, Platform) however, vary in release dates. Here’s a little info on each of the newly announced features:

Looking a lot like Zoom 2.0, Facebook’s Messenger Rooms will give you the opportunity to create a ‘room’ from Messenger or from Facebook directly. You can then invite anyone to join your video call, even if they don’t have a Facebook account. Rooms will soon hold up to 50 people with no time limit.

When you’re invited to a room, you can join from your phone or computer without needing to download anything to get started. You can also play with AR effects like bunny ears and AI-powered features like 360 backgrounds if you use the Messenger app.

Facebook has had many security and privacy problems, but Zuckerberg said in a livestream (seen below) that the company has been “very careful” and tried to “learn the lessons” from issues with other video conference tools in recent months. This most likely refers to Zoom and their privacy and security flaws. A former Facebook ex-security chief was even recently appointed by Zoom in their attempt to regain user trust.

However, Facebook said that people can control who can join, and can remove participants at any time, too. People can also report a room for violating Facebook rules, though those reports will not include any video or audio from the call. The company also emphasised that “Facebook doesn’t listen to your calls at all”.

Once Messenger Rooms is available in your area, here’s how to create a ‘room’ from your phone:

Messenger Rooms is rolling out in some countries this week, and will expand to the rest of the world in coming weeks.

Facebook also launched Messenger Kids, can help kids stay in touch with their friends and family. This new option can help parents connect their kids in a parentally-supervised environment will be available to more than 70 countries.

After introducing Facebook Dating, you can start a video chat in Messenger to get to know your date. This feature will be available in a few months.

You’ll soon be able to have group voice and video calls with up to eight people on WhatsApp. Previously, it was only possible to do a video call with four people at a time.

This offers another alternative for a video-chat platform, though there’s no note about any updates on if this new feature can also work through WhatsApp Web. The current four-way chat platform can only be used through your mobile phone.

There is also no information given by Facebook regarding when the new update will launch.

Like on Instagram, Facebook is bringing back Live With so you can add another person into your live video. They will also let creators and small businesses earn online by adding the ability for Pages to charge for access to events with Live videos.

Facebook is also letting more people access these live videos. like, if you have limited data or a weak connection, you can listen to the audio only. If you don’t have a Facebook account, most public live videos are available on the web and some Pages can share a toll-free number that lets you listen to the audio through any telephone.

You can livestream games from your phone using the new Facebook Gaming app. The Gaming app has already been launched, but the other features will begin rolling out today and launch globally in the coming days.

Also launching globally in the coming days, you would be able to watch and comment on live videos from your desktop, so you can follow along exercise classes on a bigger screen or listen to live performances as you work. After you go live, you’ll even be able to save your videos to IGTV, so that they can stick around longer than the 24-hour limit in Stories.

If you have one of those Facebook Portal TVs, the Facebook Live app on Portal already lets you broadcast to your profile. However, later this month you can soon go live from the device straightaway to Facebook Pages and Groups. Though I don’t think most of you would already have these at hand, they might be more popular in the near future due to more people investing in gadgets and tech that could help them get through the MCO.