I’ve always had a soft spot for Fujifilm‘s X-series of digital cameras. Well, not so much the X-A, but definitely the X-T, X-H and X100. It’s that sexy combination of old-school good looks, excellent image quality and physical dials that give their cameras that X-factor, so to speak.

And today, I got to check out the latest entry into their line of X-T cameras. It’s called the X-T3 and I’m absolutely smitten. I use an X-T20 as my daily driver. It’s the camera often dubbed as the baby X-T2, because it is. It has a lot of the same kind of features the X-T2 does, but in a much smaller form factor — some might even say too small. And while it pains me to say this, I have to agree.

One of the biggest issues I have with my X-T20 is with its ergonomics: It’s a hard camera to hold comfortably and securely for long periods of time, especially if there’s a lens attached to it. You see, I do a lot of my event coverage by myself. That means, when I have to take photos of the product, I will often only have one hand to operate my camera because the other one is occupied with holding the phone, tablet, laptop, or whatever else I’m checking out. And there just isn’t enough camera for me to hang on to, so I end up with this awkward grip where the bottom corner of the body stabs me in my palm. However, this isn’t an issue that’s unique to Fujifilm. Small cameras were always going to have this problem because, physics, so I can hardly blame Fujifilm for it. That, is where the larger Fujifilm X-T3 comes into play. Being a chunkier camera, the X-T3 had a significantly larger grip built in and it was way more comfortable to hold in the hand than my T20. Despite that, the camera doesn’t actually have a footprint that was much larger than my T20. I would still categorise this as a compact mirrorless camera, something I couldn’t say about the X-H1. Despite this smaller body though, Fujifilm didn’t skimp on the specs with their new camera. Even though it’s not the “flagship” camera anymore, the X-T3 is still the first camera to receive the company’s new 26-megapixel X-Trans CMOS 4 sensor and X-Processor 4. Yes, it’s still an APS-C sized sensor, but Fujifilm’s also packed a bunch of new features into this camera to make it quite the capable little machine. First up, it’s now capable of 30fps continuous shooting without any viewfinder blackout. At that rate, it’s almost like you’re shooting video. Speaking of video, the X-T3 is also able to shoot 10-bit 4K video at 60fps internally. It’s also got the new Eterna film simulation that debuted on the X-H1, and can also shoot in F-Log, which is like this flat colour profile that’s designed to capture more information with the caveat that you’ll need to do some colour grading in post-production.

Now, I didn’t really get to spend a lot of time filming or shooting with the X-T3 in the kind of conditions I’m familiar with, so I won’t really comment on the camera’s image quality. I will attach some of the photos I’ve shot at the end of this article so you can get an idea of what it looks like and decide for yourself. That said, I will note that I’m not particularly impressed with this camera’s auto-focus performance. Although Fuji has upgraded the PDAF system so that it now covers the entire sensor, it’s still not as good as Canon’s Dual Pixel AF. The T3 OK when you’re on AF-S, but if you’re firing through that 30fps on AF-C, you’re definitely going to get a couple of missed shots. That said, I won’t put the AF system down as a con just yet because I’d love to properly test this out in a full review before passing any kind of final judgement. 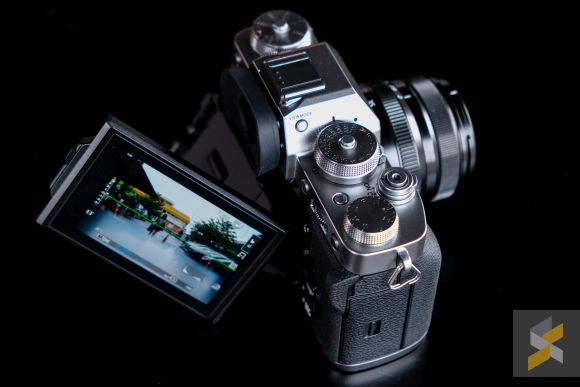 I think the bigger issue with this camera, and potentially using it as my new daily driver for videos is its lack of a fully articulating touchscreen. Instead, you get the same weird 3-way flip as the X-T2, only now the 3-inch 1.04 million dot display is now also a touchscreen. Honestly, I don’t even need the LCD to fully articulate, I just need it to flip forward so that I can monitor myself when I’m filming. Is that really too much to ask? Besides that, I liked a lot of the other features Fujifilm’s new camera had to offer, and I particularly like the I/O on this camera. Not only does it swap its micro USB port for a 3.1 Gen 1 USB-C one, but now the headphone jack for audio monitoring is also built into the camera’s body, and not relegated to the battery grip like the X-H1 and X-T2. My only concern is that the ports are pretty close together so I’m not sure how well everything would fit if you plugged both cables in. And, of course, I love everything else about it that I’ve loved on the Fujis of past. The high quality clicky mechanical dials for ISO, Shutter Speed and Exposure Comp (with locking mechanism), the retro SLR good looks and the gorgeous build quality.

But do all of these things make it worth buying? Well, that’s honestly a little hard to say because the T3 isn’t a cheap camera. Body only, the X-T3 is priced at RM7,388 and if you want a kit lens with that, you’ll have to pony up RM8,388. That’s a pretty hard pill to swallow.

If you wanted a Fujifilm for video recording — especially the run and gun stuff — the X-H1 might still be the better option because of its in-body image stabilisation. Plus, you can now get that camera — body only — for just RM6,400 online (launch RRP, RM7,899). Then, if you’re an X-T2 user, it becomes even harder to recommend an upgrade to the T3, especially not since Fuji pushed the firmware update that gave the T2 F-Log video recording too.

Oh, and don’t even get me started on its peers from Sony, Panasonic and Canon.

So yes, while I thoroughly enjoyed my brief time with this camera, it is one that’s really hard to recommend when you put on your practical pants. But the thing about Fuji’s cameras for me is that it’s hardly ever about practicality. It’s the camera you fall in love with. The camera that encourages you to shoot. The camera that gives you a truly unique experience I haven’t encountered outside of film photography.

And you can’t really put a price on that feeling. Photography by Rory Lee on the Fujifilm X-T20