This new Grab competitor has a long road ahead of them UPDATE: Diffride is expected to start their service sometime in September.

Competition is always good. After Uber’s exit from the South East Asian market, Grab is currently the dominant player in the Malaysian market. Sure, there are other alternatives like MyCar at the moment but they are still not on par with the likes of Grab and Uber in terms of reliability and user experience.

Seen as an attempt to break Grab’s monopoly in ride-sharing, Diff Global Solutions Sdn Bhd has officially introduced diffride. It’s a new e-hailing service where you can get a ride in just a couple of taps on your smartphone. We’ve downloaded the app and from our first impressions, it looks like they still have a long way to go. Unlike other ride-sharing providers, diffride aims to keep their fares competitive by offering a single flat fee of RM5/day for drivers. As a comparison, platforms such as Uber and Grab usually take a cut (around 25%) from the total fare. In theory, this flat fee approach could reduce fares for consumers, while drivers will get more income from every trip.

The RM5/day flat fee for drivers will be enforced until the end of this year and diffride may review this rate later on. For passengers, there’s a base fare of RM5 and the final fare is calculated based on distance and travel duration. diffride accepts both cash and card payment options, and you can also book rides in advance for journeys that are more than 60 minutes in duration. The app also offers the option to book a ride for a friend and you can leave their name and contact details for easier communication.

The e-hailing provider also claims to be the first to fully comply to the Ministry of Transport’s regulation. This means all drivers have to undergo screening by the Land Public Transport Agency (SPAD). On top of that, diffride vehicles must be less than 8 years old and the car model must be rated at least 3 stars under the ASEAN NCAP.

diffride also claims to be the first e-hailing service provider to offer telematics technology for their drivers, which can help to track down their cars if it gets stolen. The platform could also potentially use this feature to monitor the driving habits of their driver partners. At the moment, diffride claims to have 2,000 drivers registered and they are in the midst of screening before submitting them to SPAD for approval. They aim to have 6,000 drivers and a ridership of half a million by end of this year. 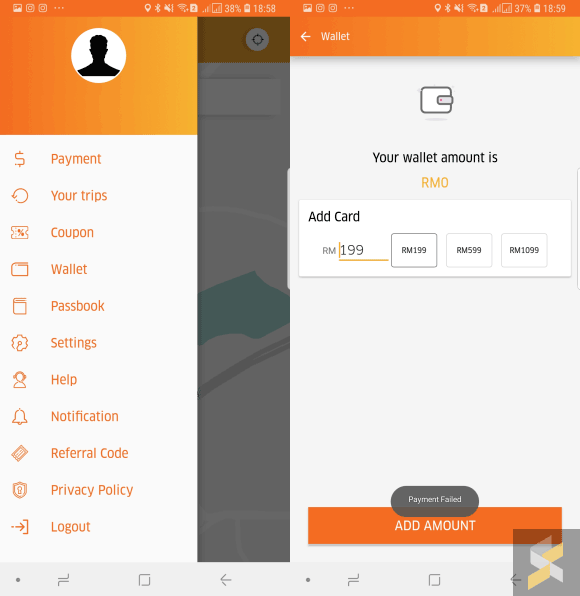 As a frequent ride-sharing user ourselves, we’ve installed the app and registered an account to give it a go. The app looks like an Uber clone with the use of similar fonts and icons. At the time of writing, diffride isn’t functioning at the moment, which is quite a surprising considering they just had a launch event with the Minister of Transport, Anthony Loke, as their guest of honour.

We tried adding our credit card in the app, but it wouldn’t work. While digging thru the app, we have also found a wallet function which surprisingly has presets for weird dominations. We tried to top up but that failed as well. When we did a quick comparison with Grab, the fares are cheaper by RM0.20-RM0.30 for short rides under 5KM. For longer rides of 12KM, diffride is noticeably cheaper by RM2-3. Looking at how incomplete the app is, we are not sure if these rates are final. When we tried to book a ride, it says no drivers are found for every category. What’s even weird is that the registration process on the website is different from the app. If you register on the web, passengers are required to submit photo of themselves along with a copy of their IC or passport. If you register via the app, this step isn’t required. Diffride should probably standardise the registration process through the app.

At the time of posting, you can’t find diffride on Apple’s AppStore and it’s only available on Android via Google Play. The Android app has a rating of 1.9 stars because obviously, it doesn’t work at the moment. What’s interesting is that diffride appears to be available in the Klang Valley sometime in March this year. We also found an earlier version of the app but looking at the reviews, it doesn’t work as well.

If it isn’t ready, why bother releasing the app to the public? diffride could have started with a simple registration of interest and only release the app once the service is officially available. At the very least, the current app should pop a message upfront that diffride will be available at a later date.

We sincerely hope that diffride can sort out their teething issues so that they can start offering commercial services soon. Have you tried diffride before? Let us know your experience in the comments below.

UPDATE: We had received an SMS stating that you can ride with diffride starting in September. They are still screening their drivers and will be releasing an updated app.

This new Grab competitor has a long road ahead of them