Shortly after announcing its latest quarterly financial results, Apple is now a company that’s worth over US$1 trillion. That’s a thousand billion US Dollars or RM4,080,500,000,000 in our local currency. At the time of posting, Apple’s current stock price is US$207.39 and it gained about 9% from US$191 just two days ago. According to Apple’s Fiscal 2018 Q3 report (1 April to 30 June 2018), this is their new record for the June Quarter. Fiscal Q3 is often the slowest time of the year but they have managed to record a total revenue of US$53.3 billion.

The quarter also marks a new revenue record for Apple services at US$9.5 billion which is a 31% increase year on year. Apple services include payments and subscription fees from iCloud, Apple Music and the AppStore.

In terms of devices, Apple had sold 1% more iPhone units but revenue has increased by 20%. According to Tim Cook, the iPhone X continues to be the most popular iPhone model and you can tell from the average revenue per iPhone sold below: 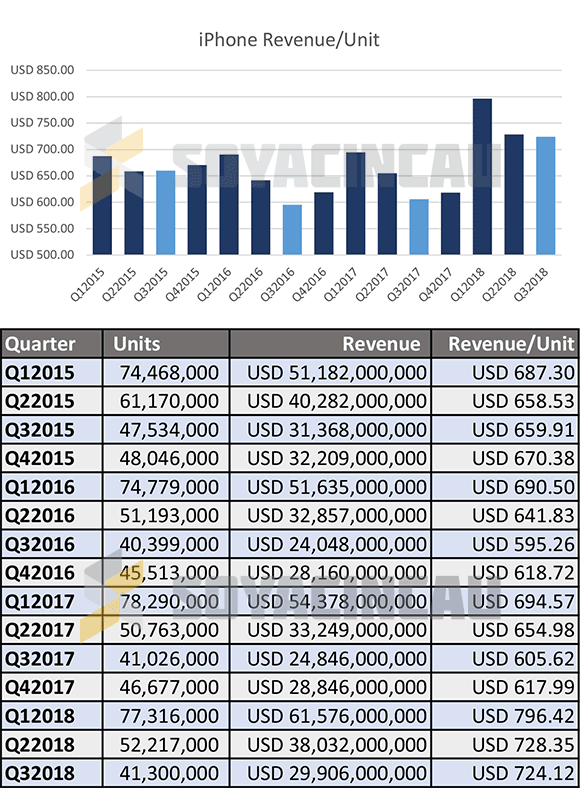 Apart from iPhone and services, another growth area is accessories where it gained 37% more revenue year on year. This covers sales of AirPods, Apple Watch, Beats, HomePod and other accessories. When it comes to iPad, they have sold slightly more units but revenue had dropped by 5%. This tells us that Apple has sold more of its base iPad 2018 which is more affordable than last year’s version. The last quarter also saw fewer Macs being sold as it recorded a 13% drop in sales and 5% less revenue. Since Apple had just introduced its new MacBook lineup with Intel’s 8th gen processor, we expect sales to pick up in the next quarter.