When I hear the words “DJI” and “drone”, I often picture a fairly competent flying contraption that can be used to record epic aerial cinematography — because that’s the kind of reputation DJI has built for themselves. Even their tiny entry-level drone, the DJI Spark, has a 2-axis mechanical gimbal and a myriad of intelligent flight features.

The latest DJI-powered drone I got to try out, however, is a little different. It is called the Tello and as far as I can tell right now, it’s a lot more toy than it is film-making tool. Now, to be fair, it isn’t a DJI drone. It’s a DJI-powered drone by Chinese startup Ryze and when I first saw it, I was shocked. From the product images, the Tello looked a lot like a slightly smaller version of the DJI Spark, but it isn’t. It’s a way smaller version of the DJI Spark — it’s so small that it looks like one of those cheap drone toys you can buy for like RM50 on Lazada.

Tello is also comically light and doesn’t come with a controller out of the box. Instead, you control the drone with your smartphone and the Tello app which you can download from the Play Store or the App Store. Up front, you’ll notice that the drone’s camera isn’t suspended from some sophisticated gimbal — it’s embedded into the front of the drone’s plastic body. The quadcopter’s four wings are attached to the body by flexible plastic arms that have a cable running through them. At the bottom of each blade is a rubber foot which, combined, are the only things preventing the chassis from touching the ground. 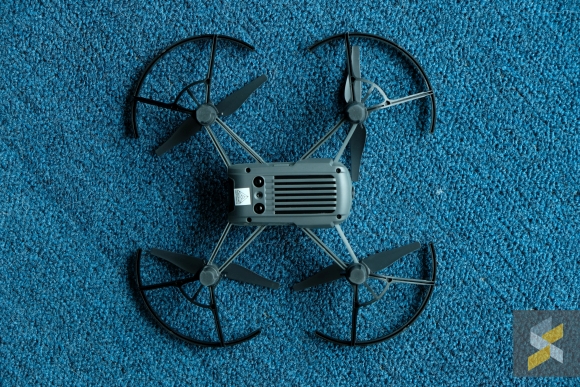 On the Tello’s belly, there are vents and a pair of sensors that are used for stuff like palm landing and detecting objects. A majority of the shell, however, is a cavity that you can slot the 4.18Wh battery in. With this, the drone is rated to get up to 13 minutes of flight time, but in my experience I’ve only managed to get maybe close to 10 minutes indoors. Right from the get-go, with the phone controller and the gimbal-less camera, you can already tell that the Tello isn’t a serious flying camera for epic aerial cinematography. It struggles with wind and doesn’t really produce great images from its HD 720p 5MP camera. But that’s because this drone isn’t designed to replace a Phantom or even a Spark. This drone is designed to be fun and easy, so it’s got a bunch of tricks up its sleeve that will help it outmaneuver some of these bigger drones.

IT CAN DO BACKFLIPS.

Sorry, that was supposed to be revealed later but I guess the cat’s out of the bag now. Yes, this drone can do backflips and a bunch of other, arguably less impressive, flying techniques through the EZ Shot menu. Y’know, it makes flying EZ. All you need to do to get this drone up and running is to push the small power button on the side (once) and the light in front will start blinking. Once that happens, launch the Tello app on your phone and connect to the drone. Once there you get access to pretty much everything the drone can do. There are two ways to take off. The first is your usual plebeian slide-to-take-off from a flat surface (lame), while the second is called Throw & Go where you can throw the drone in the air and watch it take off (cool!). Don’t just throw the drone and expect it to start flying (like we did) though, you have to activate the Throw & Go feature in the EZ Shot menu before tossing the drone or you could end up with a broken drone on the floor. Once the drone’s in the air, you can access the EZ Shot menu and start playing around with the preset drone moves. Each mode you select enables a different set of controls for the drone. For example, in backflip mode (or 8D Flip, as Tello calls it), a small box appears in the middle of the screen where you can swipe either to the front, back, left or right to have the drone flip in that direction. They’re all fairly simple controls so you just need to follow what’s stated on the display.

Besides that, Tello is also user-programmable so you can use something like Scratch to program your drone with custom commands. I haven’t tried this out yet, but I’ll be sure to try it out in the full review. Flying it regularly with on-screen controls, however, is about as intuitive as on-screen control flying has always been — which is to say, not very intutive — because you lose the tactility and precision of a physical controller’s thumb sticks. That said, you can use a Bluetooth controller (like a console controller) with the Tello instead.

Indoors, the drone doesn’t really drift much, which is a problem I’ve noticed with a lot of larger drones (because there’s no GPS lock), so that’s good. The included propeller guards also help it survive light crashes into a wall though I can’t recommend actively trying to do so. The way it handles, especially outdoors, leads me to believe that the indoors is really where this drone was designed to be flown. Despite the on-screen controls, it’s really quite easy to get the hang of flying the Tello so I don’t see it being a challenge for anyone to pick it up. There’s a real sense that this device was made to be easy to pilot. For me, the biggest issue with the Tello is its flight time and the battery restrictions that come with it. Not only will the drone not stay in the air for very long, stunts like the backflip can only be performed when the drone is above 50% battery so you’re halving the drone’s already short flight time if you want to have fun.

However, being a toy-ish drone, I guess I can’t realistically expect the Tello to have a 20-minute flight time or something ridiculous like that. It’s tiny! So, as far as first impressions go, I think the RM470 Tello’s in a pretty interesting position. It’s a bridge between something like the Spark and a toy drone, that you can also program with your own commands. It’s a drone that’s designed to be educational and fun at the same time — not for epic epic sweeping landscape shots of Iceland.

You’ll want a Mavic or Phantom for that.

As starter drone, I think the Tello’s in the right spot. It will introduce users to a large majority of the controls that are used to fly everything up to a DJI Phantom or even Inspire, so it’s a solid place for anyone to start. The Tello’s biggest strengths, however, are its price and how fun it is to fly, which will be instrumental in drawing people into the wonderful world of drones.

But those are my initial impressions. What do you guys think of the Tello? Let me know in the comments below.