The LG G7 ThinQ is scheduled to launch tomorrow in New York. This is LG’s first all-new flagship for 2018 which was supposed to be announced in the first quarter of the year.

Ahead of its big reveal, serial leakster Roland Quandt has just dropped more clues of the latest dual-camera flagship along with some official renders of the device. As we’ve seen before, the LG G7 ThinQ will come with a notch and the display is expected to be a 6.1-incher using an IPS panel. From the renders above, display stretches edge to edge with rounded corners and there’s a slight chin at the bottom of the phone. According to Roland, the display pushes a 3120×1440 pixels resolution in a 19.5:9 aspect ratio. Interestingly, that’s the same display aspect ratio as the iPhone X but the resolution is much higher than a Samsung Galaxy S9+ (2960×1440). As expected, it runs on a Qualcomm Snapdragon 845 processor that’s mated with either 4GB or 6GB of RAM. Onboard storage is said to be 64GB but it isn’t clear if they are offering microSD expansion. Over at the rear, the LG G7 ThinQ comes with a dual-camera setup. Both cameras are apparently 16MP shooters with a f/1.6 aperture on both lenses. In the past few flagships, LG would offer wide-angle capabilities for its secondary shooter but it isn’t 100% clear if they would retain this feature on the G7 ThinQ.

Powering the device is a 3,000mAh battery which is smaller than the G6’s 3,300mAh capacity but it will support Quick Charge 4.0 via USB-C. The LG G7 ThinQ will also feature stereo speakers with an internal resonance chamber to amplify its bass effect. There’s also a HiFi Quad DAC and support for DTS:X 3D Surround sound for your headphones. 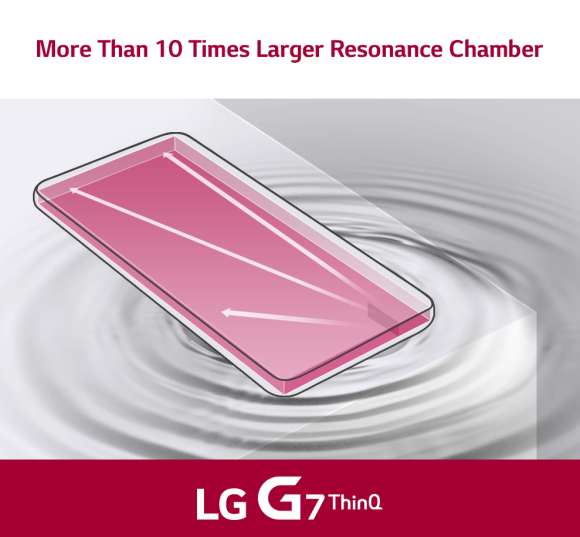 Out of the box, it runs on Android 8.0 Oreo and it also gets IP68 dust and water resistance. In terms of pricing, the LG G7 ThinQ is said to be priced under 680 EUR (RM3,228) in Germany, making it more affordable than the Samsung Galaxy S9 (849 EUR = RM4,030). We will learn more after its launch that’s happening tomorrow.

UPDATE: Some hands-on photos of the LG G7 ThinQ has surfaced online. Looking at the top of the display, it appears there’s a way to “hide” the notch with a darker theme.