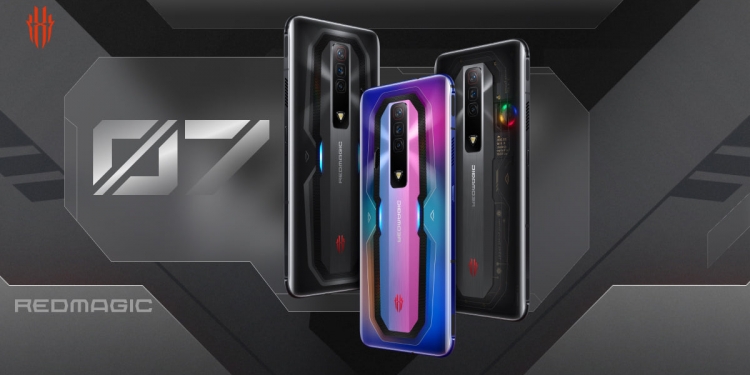 For starters, the Snapdragon 8 Gen 1 on the Red Magic 7 is cooled by a new ICE 8.0 multi-dimensional cooling system. It consists of a vapour chamber, a 20,000RPM fan, phase change thermal interface material, high-conductivity copper foil, thermally conductive rare earth materials, and a graphite sheet. Air is sucked into the phone via an intake on the right side of the camera module and exhausted through a vent on the frame. The result is an increase in heat dissipation and absorption speed by 400 times compared to its predecessor.

Similar to the previous model, the Red Magic 6, the latest flagship gets a 6.8” AMOLED display with a Full HD+ resolution of 1080 x 2400 pixels and a refresh rate of up to 165Hz. The display can be manually toggled between 60, 90, 120, and 165Hz refresh rates either in the settings or the Game Space HUD. The screen is also super sensitive to your fingers with a touch sampling rate up to 720Hz which dwarf the Redmi K50 Gaming’s 480Hz. But just like the Redmi, the Red Magic 7 also covers 100% of the DCI-P3 colour gamut. The 8MP selfie camera is nestled in the top bezel of the display.

Turning the phone around the back, there is a triple camera layout with a 64MP primary camera, 8MP wide-angle sensor and a 2MP macro lens. The LED flash sits in a triangular housing reminiscent of Iron Man’s Mark VI armour. The whole camera module sits almost flush in the rear glass panel, making it comfortable to grip during gaming sessions. Along the same vertical axis as the camera module, there is a lit Red Magic logo at the bottom. That’s where the similarities end, as each variant comes with its distinct finish.

Being the flagship variant, the Supernova is the only member to get a unique transparent rear glass panel where the RGB fan along with other decorative pieces can be viewed. The Pulsar on the other hand has a blue-pink pulsating gradient colour on the back glass, while the Obsidian gets a more conventional black colour option. Both variants also come with an RGB light at the centre instead.

The phone runs on Android 12 out of the box with Red Magic OS 5.0 on top. Some gaming-focused features included are Quick Picture Library which is a picture-in-picture mode that allows you to overlay a screenshot of, for example, the map during gameplay. There is also Quick Notes that calls a notepad on the screen to quickly jot down game notes. Both features can be saved to the Red Magic view board which is accessible by swiping from the side of the screen and can store up to 50 notes and images for easy access. Lastly, a feature called Quick Stopwatch – which comes up with these names – will remind players when their in-game character’s ability or power is ready to be used again after the cooldown is complete.

The updated Red Magic Studio app can wirelessly display your gameplay to an external display at 120Hz and promises low latency when projecting gameplay to a PC. For a more immersive gaming experience, there are also two, 500Hz touch-sensitive shoulder triggers with a touch response of 7.4ms. The surface is also coated with an anti-sweat material.

For audio, there are a pair of stereo speakers with DTS Ultra X surround sound support. If you want more listening, there is also a good ol’ 3.5mm headphone jack for wired headphones. As for wireless connectivity, there is Bluetooth 5.2 and Wi-Fi 6 at your service.

Powering the phone is 4500mAh, double-cell battery with support for 65W charging with the included GaN charger. The phone can reach a full charge in just 25mins. The Red Magic 7 also retains the Charge Separation feature from the Red Magic 6 which allows the phone to be powered directly via cable, bypassing the battery. This would produce less heat and can help to prolong the battery’s lifespan.

There is no official Malaysian pricing available yet but do keep an eye out for more information on Nubia Malaysia’s official Facebook page and official Shopee store.

For reference, the Red Magic 7 will be available for pre-order on the 10th of March 2022 in North America for:

There is no estimated shipping date provided by Nubia.

For more information on the Nubia Red Magic 7, you can check out their official website.