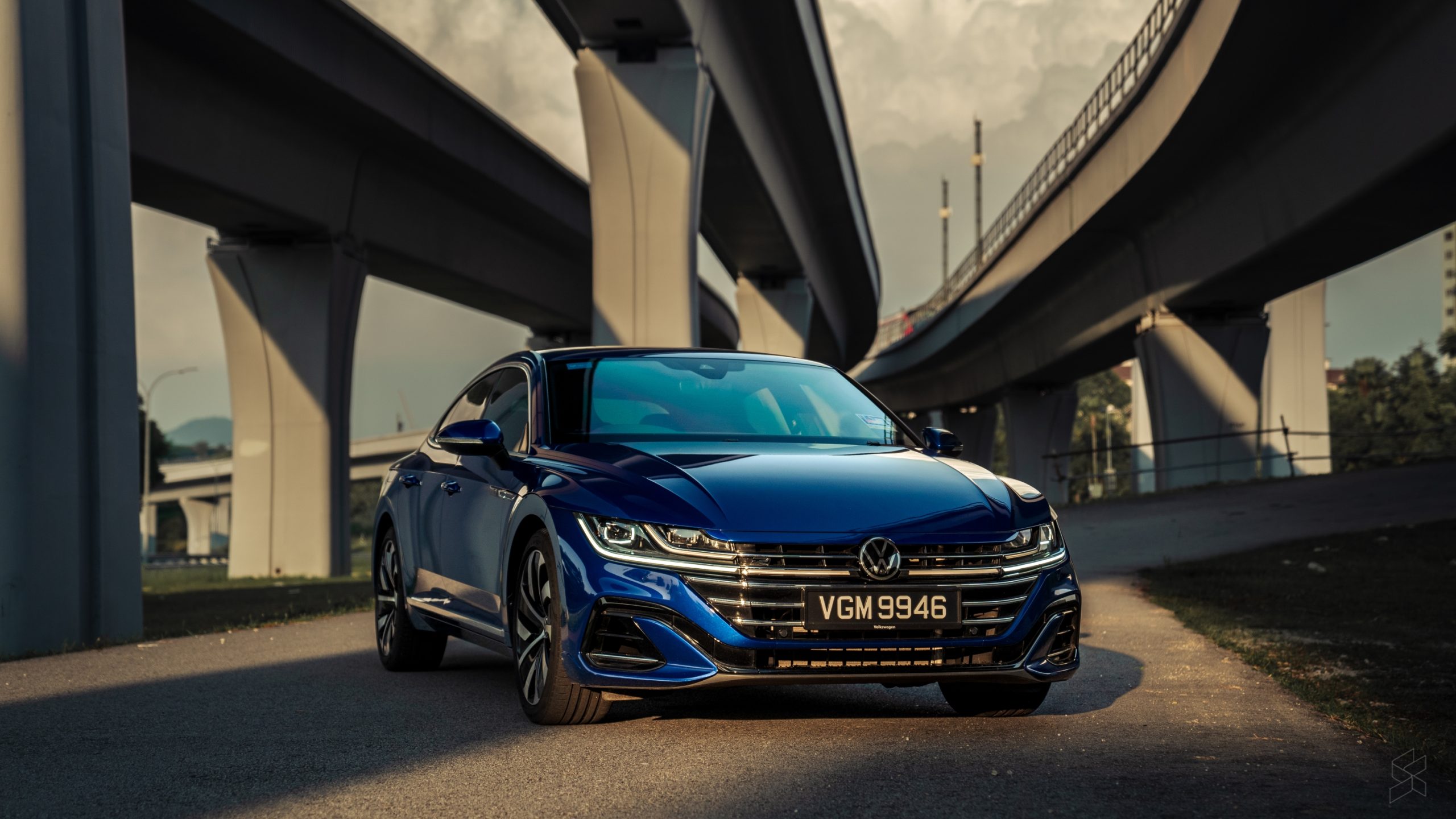 Volkswagen Arteon R-Line 4MOTION review: What’s it like to live with in Malaysia?

Like many material things in our superficial society, the car has become a status symbol. Some car brands have almost become like a measure of success, where if you drive one, it means you’ve made it in life.

And interestingly, Volkswagen Malaysia wants to be one of those brands. I personally find that kind of weird especially when “volkswagen” literally means the people’s car. But, that’s not the point. Besides, the brand’s not planning to accomplish this by selling you Golfs or Polos. They wanna do it with this bad boy.

This is the Volkswagen Arteon R-Line 4MOTION, and coming in at just over RM250,000, it’s going straight for the BMW 3-series & Mercedes-Benz C-Class’ lunch money.

But it’s one thing to want to do it, and another to actually be able to do it. You see, cars at this price point aren’t just utilitarian vehicles of labour anymore. They need to be a little special. And a big part of that starts with how it drives.

The good news is that if it’s performance you’re looking for, the Arteon R-Line 4MOTION has plenty of power. 276 horsepower, to be precise. And if you’re wondering if that’s enough power, the answer is yes.

Combined with the 7-speed DSG dual-clutch transmission, there’s very rarely anything on the road you can’t leave behind when you bury your right foot. The power feels like it’s always there even when you’re chilling low in the rev range. And that’s because according to VW you get the full grunt of the Arteon’s 350Nm of torque at just 1,700rpm.

But if you truly want that instant response, you’ll have to switch the gearbox into its manual mode and do the gears yourself with the pedal shifter. Because in anything other than manual, there’s always a short delay between when you floor it and when it gets going. Still, it’s easy to just put a tonne of power into a car and have it go really fast in a straight line. What I was more impressed with on the Arteon is that for such a big car, it handles almost like it’s on rails.

Steering is sharp and responsive, and the car feels planted with plenty of grip to spare even when I was hitting the corners as hard as I dared. And I think that’s mostly down to how the power is being sent to the road. Unlike a comparable BMW or Merc, the Arteon doesn’t send its power to just the rear wheels. It uses VW’s 4MOTION all-wheel drive system that can distribute power to all four wheels when the car needs it to keep it from losing traction.

Sure, some might say that’s boring because a “true” driver’s car should be rear wheel drive, but as someone with no professional training I really appreciated the seemingly inexhaustible amount of grip when I was hooning it on the twisty mountain roads.

But you shouldn’t mistake the VW Arteon R-Line 4MOTION for a sports car. Despite the low seating position and large 19” wheels, I don’t get the sense that it was built for the race track. I’d say it’s more like a GT car—something built to crush long distances in luxurious comfort. And I think for the most part, it does just that.

You see, despite feeling so planted on the twisty roads, the Arteon is actually very comfortable. On the highway, it’s quiet and unflinching, and on uneven B-roads, the ride is supple without feeling numb. And the inside, well, it’s great.

Much like the Tiguan I reviewed last, everything in here feels well put together. But, in the Arteon, it’s like they turned the dial up just a tiny bit.
The speakers, for example, now come with Harman/Kardon audio, and a 12-speaker system with a bass box in the boot. Unsurprisingly, it sounds really good for car speakers.

Phone connectivity also sees the usual suspects of wireless Apple CarPlay and Android Auto, while infotainment is taken care of by a fully digital cluster and centre console. Both of which have smooth refresh rates and good visibility even under direct sunlight. Mood lighting has also been taken up a notch with even more lights and a colour bar to really dial in the colour you want.

Then there’s also the fact that there’s so much space in here. I think you’ll easily be able to fit four people even if they’re on the tall side, and you won’t have to worry about bumping shoulders in the bends.

Oh, did I mention the fact that you also get a 563 litre boot at the back, complete with built-in grocery hooks and mounting points for a luggage net?
What about the fact that you can fold down the rear seats when you want to carry the really long stuff? There’s even a tiny little hatch in the middle that you can pop open to quickly grab something from the boot.

And, if your hands are occupied, you can use the foot sensor to open the boot with a swipe of your foot under the Arteon’s bumper. You can also do it to close the boot, but you need to trigger the foot sensor, then step back when it starts beeping.

Up front, although the seats are definitely more sporty-looking, they feel comfortable with plenty of adjustability. In fact, the driver’s seat even has a basic massage function which I did find handy on long journeys to keep the stiffness in my back at bay.

The only downside is that, the combination of the low seating position, very huggy seats and B pillar position means that there really isn’t a very elegant way of getting out of the car. I guess that’s the price of maintaining that low swooping roof line. And honestly, I’m not even mad.

The most obvious of which is in the form of its autonomous safety features. This was a big criticism of mine when I reviewed the Tiguan Allspace R-Line, and it remains to be a pain point in the Arteon R-Line 4MOTION. Though, I will admit, to a lesser degree.

That’s because this car does include features like blindspot detection, rear cross traffic alerts, and lane keep assistance. But there is still no autonomous emergency braking. Why? Like, you have to be messing with me at this point. You have friggin lane keep assist that’ll actively steer your car back into lane, but you don’t even have low-speed AEB for traffic jams?

And then there’s the fact that even though this car looks excellent for long road trips, there is no radar guided cruise control. You just get like a really basic cruise control system. Like c’mon. But I think by far the worst thing they’ve done to this car, is the capacitive touch controls on the steering wheel.

I thought it was OK when I spent a hot minute with it in the new Golfs, but living with this shit—it’s terrible. There’s just not enough tactility, or definition in the controls to work without looking at them. The volume controls have no separation between up or down, and yes you can slide on them, but you can’t slide and hold to continuously increase the volume? Like, really, what is the benefit of going touch here? I review smartphones for a living and even I can’t stand these fucking touch controls on the wheel.

And if we’re on the topic of things that I don’t like about the cabin, I have to talk about this silver strip on the dashboard. When I got into this car at night, I thought, wow this looks cool it adds a nice premium touch. But then when I drove it during the day, I realised now that having a shiny reflective piece on the dashboard was a terrible idea because it seems to reflect all of the Sun’s blinding light directly into your eyeballs.

Though, I have to say that the biggest adjustment I had to make when living with this car, was just how long this car is.

From end to end it’s over 4,860mm. To put that into perspective this car is 160mm longer than the 7-seater Tiguan Allspace R Line. And that’s a bit of a problem because in combination with how low the car is, suddenly it’s like all the parking lots feel too short, and my ass is always sticking out a little bit.

VW does try to make things like parking and going up tight ramps easier by including a 360-degree camera and a really cool flip out reverse camera, but it’s kinda low res. I was driving the new Toyota Corolla Cross recently and that 360-degree camera seems way nicer to use than this one. And that car costs half as much. As a result, I just ended up using my mirrors like a low tech person.

Now, at the end of the day, are any of these issues dealbreakers for the Arteon R-Line. No, I don’t think so. This is a good car—it’s a great car, especially for the money. The only question is: has VW done enough for the Arteon that it can compete with the prestige and heritage of something like a BMW 3-series or a Mercedes C-Class? I don’t think so, and I think that’s because of this VW badge right here

It’s not a three pointed star. And it’s not an ultimate driving machine. It’s just a people’s car.

But, that, I don’t think is any fault of the Arteon. You see, Mercedes and BMW have spent time, and money, and effort to associate their brands with luxury or performance. They’re not just making cars and selling them, they’re selling their customers a lifestyle—the idea of success. And unfortunately for VW, they just haven’t done that yet.

But here’s my counter point to that. After spending a week living with this car, a part of me is starting to feel like this is the thinking man’s luxury sedan. It’s more powerful than its competition, it’s more comfortable, it’s more spacious, it looks way better and the grip that you get from that 4MOTION system chef’s kiss.

But you know I’m not going to tell you how to spend your RM250,000. You’re free to spend that money however you want. But I think that you’d be a fool if you don’t at least get in one of these and take it out for a test ride before making your decision.

Can the Galaxy S22 Ultra replace the Galaxy Note? | Let’s Talk About #84

People keep trying to install Windows 11 on random smartphones, and I'm all for it