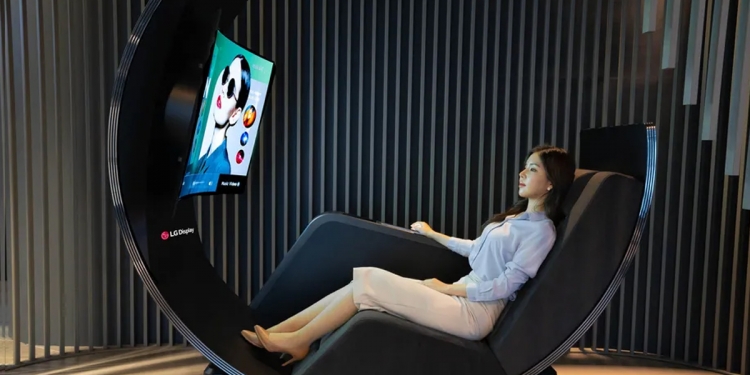 It’s our third LG-related story in two days, with the South Korean company continuing to tease their products for their upcoming CES 2022 show. Having already revealed their new gaming laptop and square monitor, their LG Display division has now unveiled their own lineup of concepts to show off at CES 2022, including a media-focused throne for one that they’re calling the ‘Media Chair’.

According to LG Display, the Media Chair right now is not a product, but they are working with a Korean massage chair company who are interested in selling it as a final product soon. The concept shown off by LG Display for CES 2022 though won’t have any massaging elements in it, though it still has a pretty comfortable looking reclining chair to it. The futuristic looking recliner has speakers built into it too. Furthermore, even if you recline further back into your chair, because the frame moves along with you the TV attached to it will always be in your line of sight. It’s perhaps almost like the gaming-focused Acer Predator Thronos gaming rig from 2018 except more for content consumption, and just like that RM56,999 gaming chair, if this LG Display Media Chair hits the shelves it’ll likely be just as expensive, if not more.

The actual TV itself is a 55-inch, OLED TV with a curved display. It’s mounted to the frame of the Media Chair, allowing it to rotate. The OLED panel in the TV is itself a speaker too, thanks to the LG Display Cinematic Sound OLED technology that literally vibrates the screen itself to produce sound. We’ve seen this kind of stuff from them before of course, having been on other LG products like the LG G8 ThinQ smartphone from 2019. The TV’s 1500R curve meanwhile should offer a perfect focal distance away from the seat to get an optimal viewing experience, according to LG anyway.

LG Display’s Media Chair wasn’t the only absurd looking concept that they intend to show off during CES 2022. They also have the ‘Virtual Ride’, which is a weird looking exercise bike of sorts that has three 55-inch, 4K OLED displays attached to each other. It wraps from under your bike to over your head, that should make you feel as though you’re actually biking outdoors. If you remember the Peleton exercise bike with a TV built in, LG Display’s Virtual Ride is kind of similar except on steroids. And because it’s not a smooth curve throughout the display, LG has had to warp one of the displays a super tight 500R around the corner to get the screen over the rider. They say that it could be an alternative to VR headsets, but the weird aspect ratio means that you’re only getting the immersion riding in a straight line.

“We will continue to provide differentiated value to our customers through OLED’s infinite potential while also moving forward with integrating our business into diverse industries,” – Yeo Chun-ho, LG Display Head of Business Development

The Korean giant are certainly getting ready to put up quite a show at CES 2022. But as we’ve seen with 2018’s LG Cloi, sometimes it won’t always be so smooth sailing. Nevertheless, we’re already really excited to see what else LG has in store for us when CES 2022 rolls along in January. In the meantime, you can check out more information about the Media Chair and Virtual Ride on LG Display’s website.