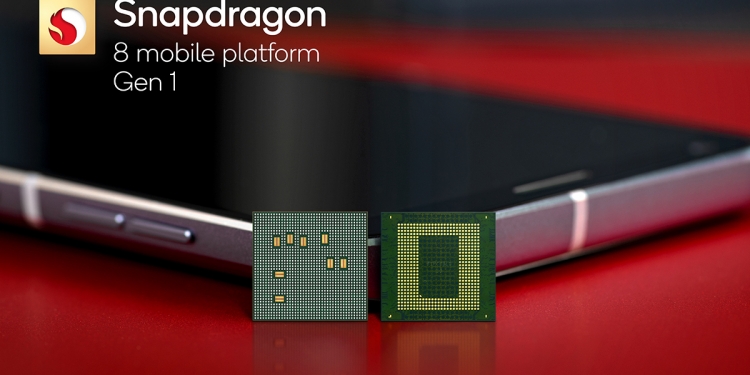 Following months of speculation and leaks, as well as the launch of MediaTek’s own Dimensity 9000 processor, we finally get to see what Qualcomm has to offer. The Snapdragon 8 Gen 1 as it’s now called following its rebrand is Qualcomm’s new flagship mobile system-on-chip, and they’ve just shown it off at today’s Snapdragon Tech Summit.

As is expected, this is the first Qualcomm chip to use Arm’s new Armv9 architecture. It comes with a single Cortex-X2 prime core clocked at 3.0GHz, three performance Cortex-A710 cores clocked at 2.5GHz and a further four efficiency cores consisting of the Cortex-A510 clocked at 1.8GHz. And just like the Dimensity 9000 from rivals MediaTek, the Snapdragon 8 Gen 1 will be built on the 4nm process too. Curiously, while the new chip also features a new GPU, it’s just called the Adreno GPU with no numbering behind it. Pairing this is the new Adreno Frame Motion engine, a frame-interpolation implementation that can increase frame rates without needing extra power. Furthermore, it’s new Hexagon digital signal processor is also without numbers.

The Snapdragon 8 Gen 1 will be able to support LPDDR5 RAM at 3,200MHz, while the new Qualcomm Spectra image signal processor will be able to capture images up to 200MP. On top of that, it’s also able to up to 108MP at 30FPS with a single camera, 64MP+36MP with two cameras simultaneously and even three 36MP cameras at the same time. It’s possible to shoot up to 8K HDR video too at 30FPS, while 4K at 120FPS is also possible. In the 5G department meanwhile, the new X65 modem allows for up to 10,000Mbps download speeds. Other features of note include a new Qualcomm Aqstic smart speaker amplifier, improved chipset security, Snapdragon Sound AptX Lossless wireless audio and Quick Charge 5 fast charging.

In terms of performance and what to expect, Qualcomm claim that the Snapdragon 8 Gen 1 will offer 20% more performance while being 30% more power efficient over the Snapdragon 888. They also say that the new Adreno GPU will be 30% faster in graphics rendering and 25% more power efficient than before, while there’s a new Variable Rate Shading Pro feature too for game developers to have more control over game performance.

Compared to the MediaTek Dimensity 9000 though, it seems to be clocked a little lower. Both the Snapdragon 8 Gen 1 and MediaTek Dimensity 9000 use a single prime Cortex-X2 core, but the MediaTek one is clocked a smidge faster at 3.05GHz, while its three Cortex-A710 cores are also clocked higher at 2.85GHz. Of course, comparing the two is not as simple as clock speeds, as there’s other factors to take into account too like power consumption and graphics performance.

Qualcomm states that the Snapdragon 8 Gen 1 will appear by the end of 2021, with their hardware partners like Honor, Motorola, OnePlus, Oppo, Redmi, Xiaomi and more set to adopt their new chip. With MediaTek and Qualcomm having shown off their new silicon, the stage is set for Samsung to launch their own Exynos 2200 processor soon, with the battle between the three major processor manufacturers in the Android space closer than ever.