iPad mini 2021: A smaller iPad Air with the power of the iPhone 13 Pro 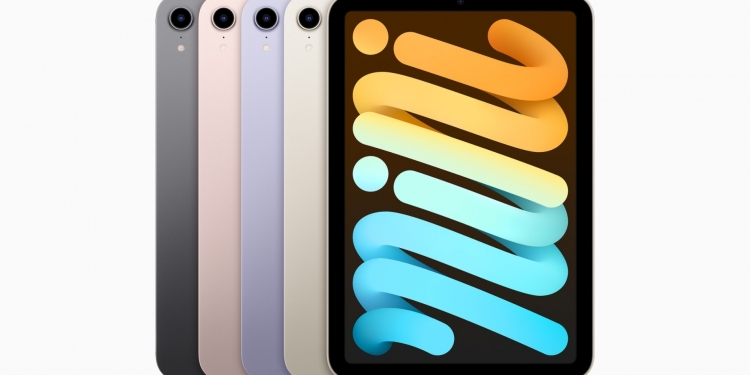 If you’re not into the latest iPhone, Apple’s next biggest announcement this morning is the all-new iPad mini. The 6th gen model now comes with an “edge to edge” display similar to the iPad Air and it runs on the latest Apple A15 Bionic chip, which is the same unit that’s powering the latest iPhone 13 series.

The new iPad mini now features a larger 8.3″ Liquid Retina Display which pushes a higher 2266×1488 pixels resolution on an IPS panel. It still has the same pixel density of 326 pixels per inch (ppi), 500 nits of maximum brightness, and it supports True Tone. Under the hood, it runs on an A15 Bionic chip that comes with a 6-core CPU and a 5-core GPU, which is similar to the top-of-the-line iPhone 13 Pro.

Despite the larger screen, the 6th gen model still retains the same width of 134.8mm as the previous model but it is now shorter at 195.4mm. It might fit in regullar jean back pockets but it would be a tight squeeze. The new model is slightly thicker at 6.3mm (5th gen iPad mini 6.1mm) but overall it is lighter, weighing less than 300g.

Since there’s no longer a home button, the iPad mini features a built-in Touch ID sensor on the power button similar to the current iPad Air. Unlocking via fingerprint instead of Face ID would be more practical at the moment especially when wearing a face mask outdoors.

For taking pictures, the rear gets a single 12MP f/1.8 camera similar to the iPad Air but it gets an additional quad-LED True Tone flash which is probably a first for a non-iPad Pro model. It can record 4K videos up to 60fps and supports extended dynamic range up to 30fps.

The front camera gets a higher resolution 12MP ultra-wide camera which supports Centre Stage. This is a video call feature that was introduced on the latest iPad Pro which uses AI to crop it or zoom out depending on how many people are there in the frame.

When it comes to audio, the new mini also features a proper two-speaker stereo setup in landscape mode, which is a massive upgrade from the older model. On top of that, the new mini has also ditched the old lightning port for USB-C. This not only allows faster data transfers up to 5Gbps, but you can also connect it to cameras, external storage, 4K displays and other compatible accessories.

If you love to draw or take down notes by hand, the 6th gen iPad mini now supports the newer 2nd gen Apple Pencil. Similar to the iPad Pro and the iPad Air, the pencil is attached via magnets and it charges automatically at the same time. However, it still doesn’t support Apple’s Magic or Smart Keyboard accessories but you can still connect it to a compatible Bluetooth keyboard.

In terms of connectivity, it supports 802.11ax WiFi 6 with speeds up to 1.2Gbps as well as Bluetooth 5.0 For the cellular model, the iPad mini supports 5G which can be enabled via a physical nano-SIM or eSIM. For our region, the 5G support is limited to sub-6GHz bands. On a full charge, the iPad mini can provide up to 10 hours of web browsing or video playback over WiFi, or up to 9 hours using mobile data.

The iPad mini 2021 is currently listed as coming soon but Apple has already revealed its local pricing for Malaysia. The iPad mini is RM200-300 cheaper than an equivalent iPad Air model. Below is the full pricing in Malaysia:

The device is offered in 4 colours – Space Grey, Pink, Purple and Starlight. In case you’re wondering, Apple is still including a 20W USB-C power adapter and a 1-metre USB-C to USB-C cable in the box.

If you want the 2nd gen Apple Pencil, it will cost you RM549. Meanwhile, the Smart Folio Cover which protects both front and back is priced at RM269. For more info, you can check out the iPad mini product page.

iPad mini 2021: A smaller iPad Air with the power of the iPhone 13 Pro