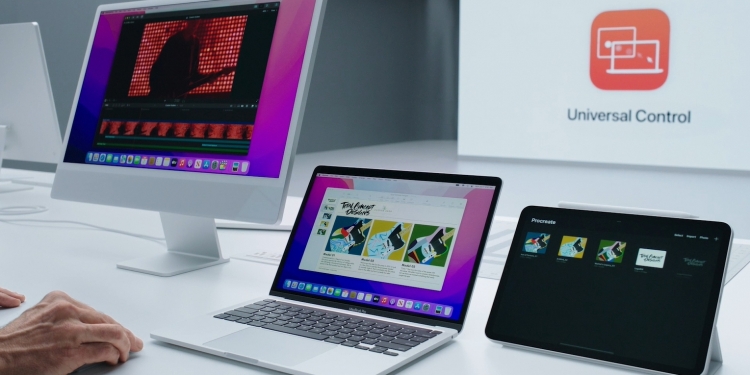 During WWDC 2021, Apple introduced a new continuity feature called Universal Control. If you own several Apple products, you can now work seamlessly with a single keyboard, mouse or trackpad.

Two years ago, macOS Catalina had enabled Mac users to turn their compatible iPad with iPadOS 13 into a secondary display. Now you can move freely between your Mac and iPad even quicker without lifting your hands from your MacBook.

With Universal Control enabled, you can use the keyboard and mouse on your Mac to control your iPad. When you move the cursor to the far edges of the Mac’s screen, the cursor will switch to the iPad’s screen, just like how you would have a spare monitor connected to your computer. The trackpad gestures and keyboard shortcuts are also supported as well.

For a seamless multitasking experience, you can also perform drag and drop actions between both devices. If you have an illustration completed on the iPad, you can drag it directly into a Keynote that’s running on the iPad.

According to Apple, Universal Control will work with more than two devices. So if you have another Mac at home or at the office, you can connect an iMac, a MacBook and an iPad simultaneously and control all three of them from the same keyboard and trackpad. If you prefer to type from a bigger keyboard, you can also switch seamlessly to the iMac’s external keyboard and mouse.

Since it uses continuity, all devices must be logged on with the same Apple ID in order for this feature to work. macOS Monterey is now available for Apple Developer Program members and it will be open for public Beta starting next month. The final release will be available later this year.

In terms of compatibility, macOS Monterey is available for iMac, MacBook Air and MacBook Pro from 2015 and above, as well as Mac Pro from late 2013 and Mac Mini from late 2014. However, it isn’t clear if all compatible iPad and Mac models with the latest update will support Universal Control as Apple tends to omit some features for older hardware.