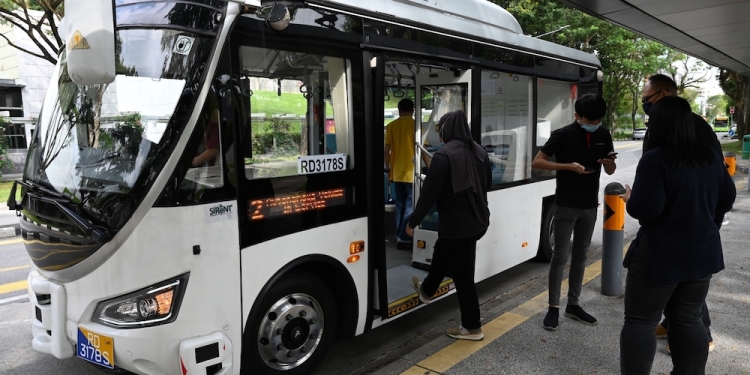 Singapore has taken its first steps towards an autonomously driven public transport network with the launch of a new trial self-driving bus service. The three-month trial launched this week and will last until 30 April.

Passengers can book a bus ride through an app, a procedure that is similar to booking a ride-hailing trip with Grab. The trial route for the bus takes them around Singapore’s Science Park, a high-tech business hub, during off-peak hours. The cost of the ride? Just SGD0.20 (RM0.60).

It is worth noting that this trial is not the first self-driving bus trial in Singapore though it is the first to actually charge passengers a fee. Autonomous vehicle pilots have been running on Singapore’s roads since 2015. Earlier this year, there were trials of driverless road-sweeping vehicles carried out in several areas around the island.

Now, it should be said that although the bus can drive itself, there is still a driver present at the wheel to take control of the vehicle if necessary. The driver would also need to drive the bus manually along part of the route.

ZDNet reported that the self-driving buses deployed in the trial were developed by ST Engineering while the mapping software used to guide the vehicles were developed by GPS Lands. Public transport companies SBS Transit and SMRT are operating the service routes in Jurong Island and Science Park, respectively.

The trials are aimed at gathering data that would eventually see the buses rolled out across Singapore commercially. According to industry experts, the technology is at least five to 10 years away from being rolled out more broadly. The self-driving vehicles could potentially help connect the last-mile between destinations that are not as well-connected to MRT stations and bus stops.

Based on feedback gathered by The Straits Times, commuters found the bus ride to be quiet, smooth and not as slow as they had expected. Some liked the fact that the bus was fully electric and thus eco-friendly. In addition, the presence of a driver at the wheel in case of emergencies reassured them.

Despite this, there were concerns over the safety of the bus’ internal systems and whether it is susceptible to being hacked by malicious individuals. One passenger suggested the bus operator install an emergency button to deal with unforeseen circumstances.

Closer to home, the development of self-driving cars in Malaysia got a boost late last year with the introduction of the country’s first autonomous vehicle testing route in Cyberjaya. The seven kilometre-long stretch of road known as the Cyberjaya Malaysia Autonomous Vehicle (MyAV) Testing Route was jointly developed by Futurise and the Ministry of Transport (MOT).

Futurise, is a subsidiary of Cyberview Sdn Bhd under the Ministry of Finance. Similar to Singapore’s trials, the autonomous vehicles tested in Cyberjaya are poised to serve as the first and last-mile connectivity in the country’s administrative capital.