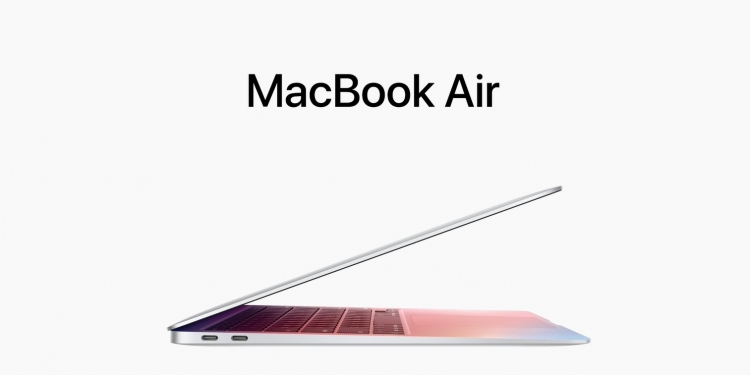 The first Mac to be introduced with the new M1 chip is the MacBook Air. This marks the beginning of Apple’s transition from Intel processors to their very own Apple Silicon.

With the new Apple M1 SoC, the new MacBook Air is said to offer up to 3.5x faster CPU performance and 5x faster graphics compared to the Intel Core i7-based MacBook Air. Built on a 5nm process, the new chip also boasts extra long battery life compared to the current version. It is also worth noting that the base model gets a 7-core GPU while the higher spec option gets an 8-core GPU.

With the combination of Apple’s own hardware and MacOS BigSur, the new Macs with Apple M1 promises to offer an even snappier experience. It boasts instant wake from sleep just like your iPhone and up to 2x more responsiveness which is said to be made possible by its unified memory architecture. During the event, Apple boasts that the M1 chip is 98% faster than chips found in 98% of PC laptops sold in the past year.

In terms of design, it looks the same as the current MacBook Air that was introduced in March this year. It still weighs 1.29kg and it is still 1.61cm at the thickest point. The entry-level MacBook still gets a 13.3″ Retina Display that pushes 2560×1600 pixels resolution but the new Air now gets P3 Wide Colour gamut. The screen still pushes a maximum of 400 nits and it still has True Tone technology.

The new MacBook Air still features a backlit Magic Keyboard without a Touch Bar and it still comes with Touch ID on the top right corner. The new Air is also fanless which provides a silent operation even when the going gets though.

While it still retains a 720p HD web cam, the new MacBook Air takes advantage of its Neural engine performance to reduce noise, improve dynamic range and white balance for your video conferencing. Also retained is a pair of wide stereo speakers and a 3-mic array with directional beamforming.

In terms of connectivity, the new MacBook Air comes with two Thunderbolt ports with support for USB 4 standard. This allows you to transfer data up to 40Gbps and it can be hooked up to a 6K display via USB-C. Also retained is a 3.5mm headphone jack and they have added support for faster 802.11ax WiFi 6.

On a full charge, the laptop with its 49.9WHr battery can push up to 15 hours of wireless web browsing and up to 18 hours of video playback, which is 6 hours more than its predecessor. This is the longest battery life ever on the Air series and it promises to provide double the duration for video calls on a single charge. Also included in the box is a 30W USB-C charger.

The MacBook Air with the new M1 chip can be configured with either 8GB or 16GB of RAM, and with SSD storage options of up to 2TB. The Malaysian pricing has been revealed and it starts from RM4,399 for 8GB RAM + 256GB storage, while the 512GB option with an 8-core GPU costs RM5,399. Education pricing starts from RM3,959. Apple has yet to reveal its official availability details for Malaysia.