Samsung Galaxy Buds Live first impressions: You have my attention 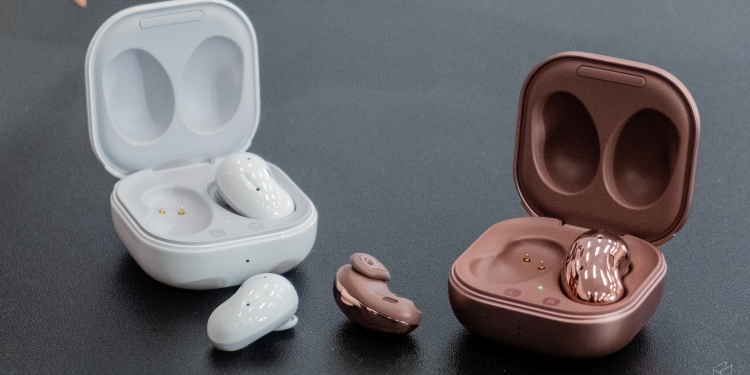 I was really interested in the Samsung Galaxy Buds Live. It’s Samsung’s brand new pair of Galaxy Buds truly wireless in-ear headphones, and it’s the first one to feature active noise cancellation (ANC). But, when I saw the design leak, things didn’t really add up.

How could they have ANC on a pair of hard-tipped in-ear headphones? Well, in a top-secret pre-event hands-on session, I got to check them out for the first time. Here’s what I found.

Let’s start with the design

I wasn’t entirely sure how I felt about the Galaxy Buds Live’s design. It looked a little silly in photos, but when I saw them in person I actually kinda liked it. It was bigger than expected, and looked a lot like an over-sized kidney bean but when I popped them in my ears, they were surprisingly unobtrusive. Nothing stuck out too much and my colleague Hanif tells me that it’ll probably work really well even under a helmet which is cool.

The Buds Live, fit into the first category of hard-tipped in-ear headphones. That means you’re not getting a super snug fit in your ear, and you’re not getting great passive sound isolation. You’ll be able to hear people around you as well as all the environmental noise that comes with that.

Coupled with the unconventional design and I was almost convinced that it wouldn’t fit well. But it did. In fact, it stayed put in my ear, and no matter how hard I tried to shake it off, it didn’t budge. The little interchangable rubber tip at the top of the Buds Live does an admirable job of holding the earbud in my ear.

And, since you don’t need to worry about getting a super tight fit to enjoy the headphones the way they were meant to sound, I have a feeling that these will fit more people than the soft-tipped Galaxy Buds.

Samsung says they were designed to sound good

But really, which company doesn’t say that about their headphones? Yet, not many actually do.

Samsung took an interesting approach with the design of the Galaxy Buds Live and how it delivers sound into your ears. Basically, the 12mm speaker driver sits at the top portion of the bean shape, and pipes audio through a “duct” or chamber all the way into the other end of the bean and then into your ears. There are even vents along the duct that Samsung says is designed to make the sound better.

And if you ask me, I think they sound pretty good…for hard-tipped headphones. I’d put them right up there with the regular AirPods, but I still prefer the sound of a good pair of soft-tipped in-ear headphones more. There’s more isolation, more sound separation and it’s easier to pick up details in a track like that.

That said, I’d like add a caveat, and that’s the fact that I only really got to spend less than five minutes with one of these in my ears. I didn’t even have time to get through one song, and I was in a fairly noisy room which isn’t ideal for headphones designed like this.

“But Rory, these headphones have ANC!”

Well, yes, but also it’s not the kind of ANC you’re probably expecting. When I think of ANC, I imagine the unreal ability for a good pair of ANC headphones to drown out all the external sound and put you in a world of your own. Something like the Sony WH-1000XM3 headphones are a good example.

However, Samsung says that that’s not how they designed the ANC for the Galaxy Buds Live. After all, the did go for the hard-tipped approach so you’re never going to get absolute silence. Which is why, when I turned on the ANC on the Galaxy Buds Live, I…almost didn’t notice a difference.

As a result, I could also hear when the Samsung rep was explaining to me that they’ve designed the ANC on the Galaxy Buds Live to work to cancel out the drone and ambient noise that you would experience when you’re on planes, trains and buses. And also how they’re not designed to cancel out people talking.

I guess that kind of makes sense because I’ve heard from people who use good ANC headphones that the silence can sometimes be deafening. But, since I had no way of verifying if the Buds Live could indeed drown out the drone of public transport, I’ll remain skeptical. What’s more, when I pick ANC headphones, I don’t just want to cancel out the drone, I also want to cancel out my noisy colleague Nic Ker.

With the Buds Live, I have no choice but to listen to him. And that’s a little unfortunate.

I was, however, happy with the battery life claims. Samsung says that just the buds will do 8 hours between recharges, and if you add the case into the mix, you can get up to 29 hours of battery life which I think is pretty good. Especially considering how small the case is. There’s also fast-charging (I guess?) where you can get an hour worth of listening in just 5 minutes of charging.

Regardless, I’m interested in trying the Buds Live out

You may hate to hear it, but I thought the Galaxy Buds Live was definitely the more interesting Galaxy product Samsung let us check out that day. Yes, even over the “hero” Galaxy Note 20 and Note 20 Ultra.

Since I didn’t get to spend much time with them, I won’t pass judgement just yet. I still want to see how they sound in more scenarios with more genres of music. And, I want to see how effective the ANC is in drowning out annoying noise.

Right now, I think I’m still leaning towards soft-tipped in-ear headphones. I really like the isolation that those headphones can offer, and that often leads to better audio in most scenarios. I’m also curious about the price because at the time of writing, I don’t know how much they will be priced at just yet.

In the meantime, I’d love to hear your thoughts. What do you think of the Galaxy Buds Live? Let me know in the comments below.

Photography by Hanif Azrai and Zachary Yoong on the Fujifilm X30 and Sony A7 III.

Samsung Galaxy Buds Live first impressions: You have my attention