Nike and Adidas finally agree on something: “For once, Don’t Do It” 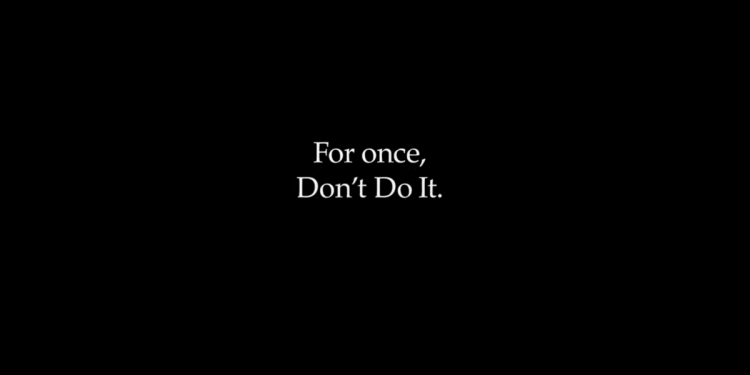 Nike‘s new video doesn’t really look like your typical advertisement from a major sportswear manufacturer. The 1 minute-long video is totally devoid of any footage or fancy animations, and there is zero mention of a campaign or any products. Instead, the only thing you see is plain, white text on a black background—and a simple, powerful message.

For once, Don’t Do It. That’s the title of the video, and those are also the first words that appear in the video. Don’t pretend there’s not a problem in America. Don’t turn your back on racism. Don’t accept innocent lives being taken from us.

Don’t make any more excuses. Don’t think this doesn’t affect you. Don’t sit back and be silent. Don’t think you can’t be part of the change.

The video was released on YouTube on the 29th of May 2020, and has garnered 594,491 views at the time of writing. While he isn’t mentioned by name, the video is clearly referring to the recent death of George Floyd, an African-American man who recently died after being the victim of alleged police brutality in the U.S.

Floyd’s case has sparked mass outrage across the U.S., and even across the world, as multiple figures—including American police officers—condemn the actions of Derek Chauvin, a police officer from Minneapolis. Chauvin is charged with third degree murder, but the Floyd family lawyer has called for first degree murder charges to be brought against the officer instead.

Leading figures in the sports world have also lent their support for the Floyd family, and to stand against the alleged racism that led to Floyd’s death. Jadon Sancho, a forward for Borussia Dortmund, wore a shirt calling for justice for Floyd, a stance mirrored by other players such as Marcus Rashford, Weston McKennie, and Achraf Hakimi.

And the ad, created by Wieden + Kennedy, an advertising agency based in Portland, is the perfect example of how something simple can be so powerful. Adidas, for their part, put aside the long-standing rivalry with the American company to retweet the video—one of the only times you’re going to see direct rivals retweet each other:

This isn’t the first time that Nike has been involved in unorthodox, socially conscious videos. Back in 2018, Colin Kaepernick, the NFL quarterback-turned-activist, knelt during a pre-game playing of the U.S. national anthem to protest against racism. Nike then released a full ad featuring the NFL player, which was subject to criticism and praise in equal measure.

Regardless of all of that, this is a move that is commendable, in my humble opinion. Even more so for the fact that there aren’t any taglines (besides “Don’t Do It”), any campaigns, or any promotional material in the video. Of course, naysayers will argue that the video is a marketing gimmick, with commenters for the video bringing up Nike’s alleged history with sweatshops in third world countries.

But the message is sound. Stand together against racism.

Nike and Adidas finally agree on something: “For once, Don’t Do It”