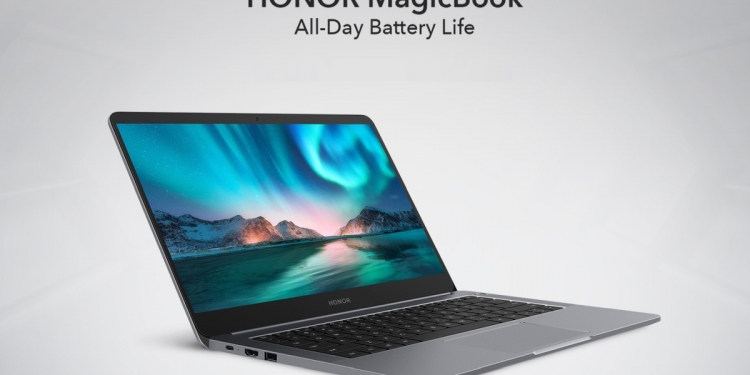 [ UPDATE 18/3/2020 10:00 ] The Honor product launches have been postponed indefinitely. Honor Malaysia will provide an update at a later time.

Honor Malaysia will be unveiling three new products in Malaysia next week and it includes its anticipated MagicBook laptop. The devices are launching on 24 March 2020 and they are expected to be sold via their online store.

The Honor MagicBook 14 is their first laptop to be released in Malaysia. It features a 14″ Full HD display and it runs on an AMD Ryzen 5 3500U with Radeon Vega 8 Graphics. The laptop’s 57.6Wh battery is rated to last up to 10 hours on a single charge and it supports 65W fast-charging via USB-C.

Overall, it weighs 1.45kg and has a thickness of 15.88mm. Out of the box, it runs on Microsoft Windows 10. In terms of ports, it has a USB-C for charging and data transfer, two USB-A (1x USB 3.0 + 1x USB 2.0), a standard HDMI port and a 3.5mm headphone jack. The laptop has a power button with an integrated fingerprint sensor and it has a quad-speaker setup that’s enhanced with Dolby Atmos.

As mentioned earlier, the MagicBook that’s coming to Malaysia is different from the one that was launched in Europe. There’s no pop-up webcam on the function keys and it lacks the cool blue highlights around the chamfer of the lid. For the Malaysian market, we are getting the 8GB RAM + 512GB SSD variant which is non-expandable and it only comes in Space Grey. At the moment, there are no pricing details yet but we reckon it should be under RM3,000 and somewhat similar to the Huawei MateBook D 15.

Meanwhile, the Honor 9X Pro is the “higher-spec” version of the Honor 9X mid-range series. It runs on a Kirin 810 processor that comes with its own NPU. So far there is no pricing info yet but Malaysia will be getting the 6GB LPDDR4X RAM + 256GB UFS 2.1 storage version.

Similar to the Honor 9X, it hs a 6.59″ FullView Full HD+ display that has no notches or punch-hole. It gets a 16MP pop-up selfie camera while the rear gets a triple-camera setup. This consists of a 48MP main camera, an 8MP ultra-wide-angle lens and a 2MP depth camera.

The Honor 9X Pro comes with a 4,000mAh battery that supports 10W charging via USB-C. The device has Bluetooth 5.0 but strangely it doesn’t support 802.11ac WiFi. The Honor 9X Pro is also the company’s first Huawei Mobile Service smartphone in Malaysia. This means you won’t get Google apps and services pre-installed, and you’ll have to use Huawei’s AppGallery to discover and install your apps.

In addition, Honor is also releasing a new variant of the Honor Magic Watch 2. It is a smaller 42mm version that comes with a rose gold finish. Since this isn’t the 46mm variant, the battery life is shorter with a rated 7-days of usage on a single charge and it doesn’t come with a speakerphone for voice call support.

Honor hasn’t revealed its price tag just yet but as a comparison, the 42mm Agate Black/Sakura gold version is priced at RM599 while the 46mm Charcoal Black version is going for RM699.