Lenovo Yoga Book C930 first impressions: Still nothing quite like it 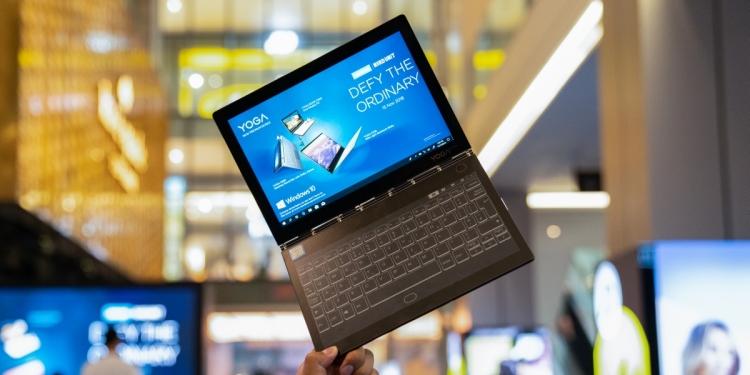 I don’t think any laptop has caught my eye the way Lenovo‘s original Yoga Book did. It was not a great laptop, nor was it a particularly excellent tablet. It sat somewhere between, but most importantly, it was a breath of fresh air. There was nothing quite like the Lenovo Yoga Book back in the day, and that’s not something you can say very often.

But now, it’s finally time for a refresh. While it was easy to forgive the original Yoga Book for a lot of its flaws — because it was a first-gen device — whatever follows does not have that same luxury. And that follow-up device is called the Lenovo Yoga Book C930, or as I like to call it: The Lenovo Yoga Book 2.

To say that there were a handful of pain points with the first-generation Yoga Book would be a little bit of an understatement. It didn’t really have enough power to run Windows 10 properly, nor was it particularly good at being a laptop thanks to its Halo Keyboard. Revolutionary or not, that keyboard was the single hardest thing I’ve ever had to type on. Needless to say, Lenovo had their work cut out for them.

Almost right off the bat, you can tell that Lenovo had a very focused vision with the second-generation Yoga Book. They wanted to make it more usable, without sacrificing on the device’s novel concept. And, I think for the most part they did a good job.

For starters, they gave the Yoga Book C930 a pretty significant boost in performance. While the old one had a paltry Intel Atom processor, the C930 now packs either an Intel Core i5-7Y54 processor or an Intel Core m3-7Y30 chip. Then, they mated that to 4GB of LPDDR3 memory and up to 256GB of SSD storage. Yes, these are still just Y-series processors, but the difference in performance is palpable.

Although I only had a short amount of time with the demo unit at the launch event, the difference in performance was immediately noticeable. Granted, being faster than the original device was never a high bar to clear, but that doesn’t make me any less glad that they’re finally giving you more PC.

Speaking of more, Lenovo’s also taken the display up a notch. Now, it features a slightly larger 10.8-inch primary display with a higher Quad HD resolution to boot. It’s still a glossy touch panel, but the extra pixels and size is definitely a welcomed upgrade.

Then, you’ve got the biggest change Lenovo made to the new Yoga Book: Its brand new keyboard.

E inking it up

While the first device only had a Wacom digitiser that could switch between a simple drawing surface and the Halo Keyboard, the new Yoga Book C930 gives you an entire display. But it’s not a power-hungry IPS display, it’s an e-ink panel — similar to the kind of screen you’d find on an e-book reader.

That means, now you can actually draw directly on the surface, read e-books on it and — of course — transform it into a keyboard. Now, I wasn’t able to read an entire e-book on it, but I’ve been informed that it only supports PDF for now (though other formats will be supported in the future) and from my experience it reads about as well as you’d expect from an e-ink display.

Drawing on it is pretty good too. It retains the excellent texture I liked from the original Yoga Book, but if you draw directly onto the e-ink display, there is a slight delay. I suppose it has a lot to do with the way the e-ink display works because the stroke recognition is pretty much instantaneous. It just takes a fraction of a second longer to appear.

In fact, a lot of what you can do with the e-ink display portion of this laptop has some delay. You’ll be waiting a little — watching the page awkwardly wipe and transition — as you switch between modes, which can be a little frustrating. But all of that was secondary to me during my hands on. The thing I was most curious about was how well the new display worked as a keyboard. Could Lenovo possibly have figured out a way to make a keyboard like this work?

Better, but is it good enough?

The short answer? Not really. The longer answer? I’d say that it is a marked improvement over its predecessor, but I don’t think that it’s anywhere near being good enough to fully replace a proper keyboard just yet.

Because I can’t feel the keys, it becomes much harder for my brain to register that my hands are in the right place and that they’re hitting the right keys. The disconnect there was something I faced on the original Halo Keyboard, and I find myself having this same uncomfortable feeling on the Yoga Book C930 too.

However, I will say that the new keyboard feels a lot more forgiving when it comes to touch accuracy. Even though I haven’t typed on a Halo Keyboard in a long time, I found myself making fewer typos on the Yoga Book C930 five minutes into using the keyboard, than I did on the original Yoga Book even after nearly two weeks. I think a lot of that has to do with the new modern keyboard layout that hides the “trackpad” until you need it, freeing up more space for larger individual keys. Just tap the little circle at the bottom and a trackpad expands, and when you resume typing on the keyboard, the trackpad shrinks back into the little circle. A super neat way to be more efficient with the limited space.

What’s more, because of the flexibility of having an e-ink display, Lenovo is able to customise the layouts of the keyboard depending on the language you choose to type in. The unit I used, for example, could completely switch layouts when I switched between US and UK English, so the possibilities here are almost endless. Oh, and of course, who could forget the fact that they also added a neat animation that mimicked a key being depressed just because they can now.

Of course, I won’t say more until I’ve had a chance to test this this keyboard out fully, but it certainly looks like Lenovo is heading in the right direction.

Do we finally have a practical Yoga Book?

As of right now, it’s hard for me to tell whether this new Yoga Book C930 finally has the chops necessary to replace someone’s laptop. Even though I am still a big fan of Lenovo’s unique product, I have to throw this fanboy in me out the window and treat this like the proper second-generation product that it is. So let’s look at the facts.

Lenovo gave the Yoga Book C930 a lot of the upgrades I yearned for on the original Yoga Book. There’s more power, a fingerprint scanner, a better screen and a more usable keyboard. Then, they also gave it a proper e-ink display so you can read e-books on it while retaining the portability, excellent watchband hinge and clean looks of the original.

Oh, did I mention the fact that Lenovo also went out of their way to solve one of the minor annoyances with the first-gen book? With a device as thin as the Yoga Book, it was a little tricky to pry open because your fingers could never get enough grip on the slim edge. On the Yoga Book C930, all you need to do is knock the top of the lid twice and the magnets would release the top from the bottom, allowing you to open the laptop with just one finger. This honestly wasn’t something they had to do at all. But the fact that they did so anyway earns them major brownie points when it comes to attention to detail.

But Lenovo also made sacrifices. And while some made sense, there are others that don’t. To maintain the svelte frame, for example, the company looked like it was forced to give it a Y-series processor, and for something that’s also designed to be a tablet, it has a rated battery life of less than 10 hours. Then, there’s the peculiar decision they made to ditch the 3.5mm headphone jack that I was very happy to find on the original Yoga Book. Granted, you do get two USB-C ports to compensate, but what world do we live in if even a laptop doesn’t come equipped with a headphone jack anymore?

If I were to look at the Yoga Book as a whole, Lenovo’s definitely made a better device than the one they produced the first time around. But if you want me to answer whether they’ve finally made this dream product that combines the best of a tablet with the best of a laptop, I honestly don’t think so — at least, not right now. I’m going to need a lot more convincing than the couple of minutes I got to spend with it at the launch event.

However, the Yoga Book C930 still has one thing going for it: It’s still got the magic of the original. Even after all these years, there’s still nothing quite like it in the real world. Sure, there are some fancy concepts from companies like ASUS, but I haven’t seen another major brand with the balls to put one out for consumers to buy just yet. And I can’t wait to give this piece of technology a full review.

Unfortunately, we still don’t know how much you’ll have to pay if you want to get your hands on this magical book because Lenovo Malaysia hasn’t revealed its RRP just yet. They say it will be revealed by the end of this year (2018), so we’ll keep you posted as soon as we hear something.

In the meantime, let us know how much you’d pay for something like this in the comments below.

Lenovo Yoga Book C930 first impressions: Still nothing quite like it