Shopee records over 11 million orders in 24 hours during 11.11 and you won’t be able to guess what the top-3 selling items were 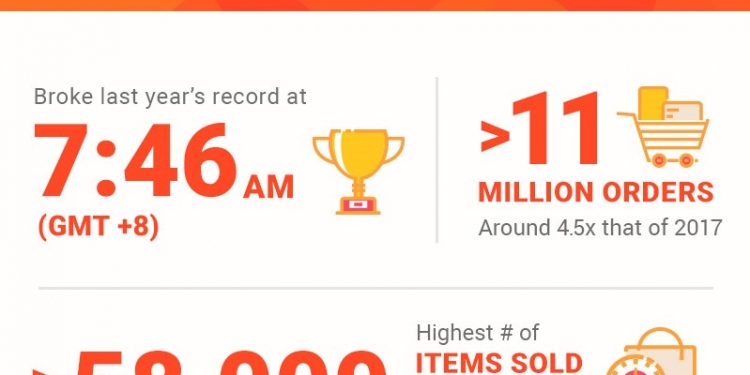 Shopee recorded over 11 million orders across Southeast Asia in just 24 hours during the 11.11 singles day sales recently, over four times more orders than what it received in 2017. The platform received over 42 million visits and at its peak, Shopee sold over 52,000 items in a minute!

While 11.11 singles day has always been closely associated to deals on gadgets and technology products, you won’t be able to guess what were the top-3 items that Malaysians bought on on the day.

According to the top-3 items bought by Malaysians on 11.11 were Milo, Telekung Arafah and Petpet brand disposable diapers. This just goes to show that 11.11 offered up unbeatable deals not just for gadget junkies but for everyone as well. Health & Beauty, Mobile & Gadget and Home & Living emerged as the top three categories.

In terms of product searches, buyers look for a varied range of products with “women blouse”, “watches”, “mobile phones” and “air fryer” being among the most popular searches made on the day.

And it wasn’t just the buyers that got the best deal. Sellers made had a lot to smile about on the day as well. Top participating brands and sellers enjoyed up to 716 times increase in orders and an average of more than 750% increase in traffic.

In terms of gadgets, Realme 2 Pro, which debuted in Malaysia just a few days prior to 11.11, was the best-selling smartphone for the day.  While we’re on the topic of mobile gadgets, the massive sales numbers are made even more impressive when you consider over 90% of orders made on the day was done using the app.

For those who missed out on the 11.11 deals, will be holding a three-day 11.11 Thank You Sale happening from 12 to 14 November as a thank you gestures to those who’ve shopped on their platform on Singles Day.

Shopee records over 11 million orders in 24 hours during 11.11 and you won’t be able to guess what the top-3 selling items were