Samsung is working on a radical foldable smartphone and it may go on sale as early as next year alongside the upcoming Galaxy S10, according to reports. In addition, it looks like the Galaxy S10 may have 5G support and an in-display fingerprint scanner.

Samsung has been working on a foldable screen smartphone for years now, and the buzz is that the Korean tech giant is close to having a consumer version ready to go on sale in 2019.  According to reports, Samsung has been toying with two different prototypes for the foldable device, one a predominantly horizontal layout where the screen unfolds sideways while the other is a predominantly vertical layout where the screen folds upwards. It is indicated that the vertical folding version is the one that’s gaining traction among the product team and is the one that is likely to be making into production. The vertical layout is preferred for a couple of reasons, one: the device is much more comfortable and more natural to hold in the vertical orientation and two: because it provides the most screen real-estate as possible without the device being bulky to hold. The Wall Street Journal reported that the device will have a screen size about 7-inches diagonal when unfolded.  It has an extra four-inch screen on the outside, allowing users to enjoy basic features — like checking emails and messages — without having to flip it open. The display can also be turned into a touchpad – which could be used as a gaming console not much different than how you would use a Nintendo DS.

One major challenge for the folding smartphone is weight and as a result, the device may have a smaller battery capacity than the rest of Samsung’s high-end phones in a bid to save weight. In prototype form, the foldable phone allegedly weighs more than 200 grams. In comparison, the Galaxy Note 9 is 201 grams while the Galaxy S9 is 163 grams.

This is a concern for me as a device with two displays is definitely going to need a big battery to support the increase in power demand. Take Note 9 for example, it has a large 6.3-inch screen and the device has a 4,000mAh battery to meet the power consumption demand. It just doesn’t make sense to increase the display size and yet have a small battery. Personally, I would be more than happy to trade lightness in favour of a bigger battery that can guarantee at least a day’s worth of usage. 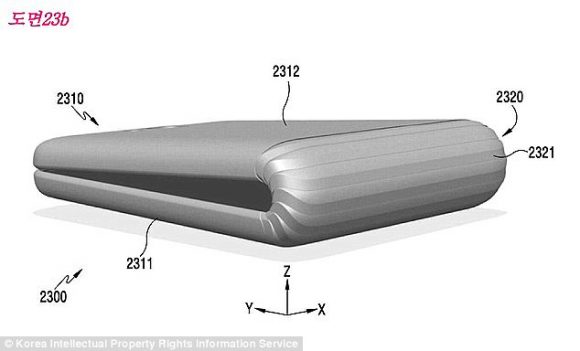 In development, sources say that Samsung has tested the device folding mechanism more than 200,000 times which is the threshold for durability but it remains to be seen the durability can hold up to the rigors of everyday use — which typically will reveal problems that weren’t found during the prototyping stage. One other area that Samsung is working to refine is the appearance of the display itself. Apparently, in its current prototype form, the display has a matt finish — this can be an issue as consumers tend to prefer a glossy finish instead. Interestingly, it is also said that Samsung will be partnering with Google on creating a bespoke version of Android just for the folding phone.

Will a folding phone be the next big thing, or is it a rehashed gimmick from the past. What are your thoughts?