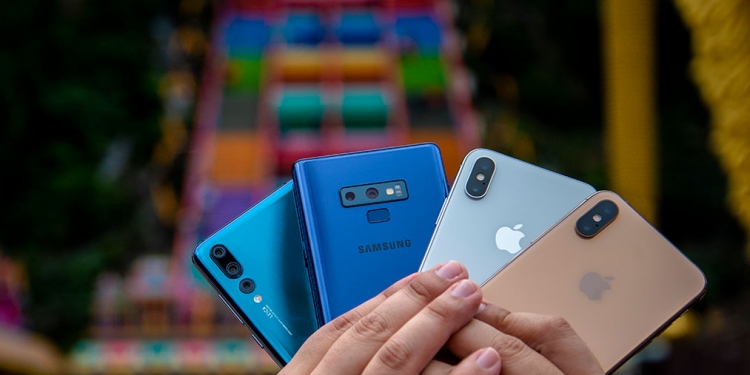 When the iPhone XS was announced, it retained a similar dual 12MP main camera configuration as last year’s iPhone X. On paper, it looks like nothing has changed, however, if you look deeper, Apple has actually made a couple of notable upgrades. This include larger pixels at 1.4-micron (iPhone X: 1.22 micron), a new Smart HDR feature and it uses a lot more machine learning thanks to its newer Apple A12 Bionic chip.

A couple of weeks ago, we took the iPhone XS for a camera shootout in Batu Caves together with the iPhone X, Galaxy Note9 and the P20 Pro. Is the iPhone XS’s camera significantly better than the rest? Read on to find out.

For a recap on the specs, both the iPhone XS and X feature a 12MP f/1.8 main camera and a secondary 12MP f/2.4 telephoto shooter that offers 2X optical zoom. Both cameras are optically stabilised, while the front comes with a 7MP f/2.2 selfie camera.

For the Galaxy Note9, it also features a similar 12MP + 12MP dual camera setup with 2x optical zoom, however, the main camera has a variable aperture of f/1.5-f/2.4 while the second lens has an aperture of f/2.4. The selfie camera on the Galaxy Note9 is a slightly higher 8MP shooter with a fast f/1.7 lens.

When we conducted this shootout, the P20 Pro is running on a newer firmware which has MasterAI disabled by default and we decided to keep it that way. As a result, the P20 Pro photo samples don’t look overprocessed like the ones taken in our previous comparison. Taken in handheld, the P20 Pro appears to be the sharpest of the lot. You can see more definition on the structure and statues. This isn’t surprising since the P20 Pro gets further assistance from its 20MP monochrome sensor which helps to capture more details. It will be interesting to see how would the new Mate 20 Pro will fare in this aspect since they have replaced the monochrome sensor for a wide-angle RGB shooter. Do look out for that in our next comparison. When it comes to getting close to the action, the P20 Pro is a sure winner since it has the advantage of a 3X optical zoom. The iPhone XS, iPhone X and Galaxy Note9 offer 2X Optical zoom on its secondary 12MP shooter. Between the two Apple smartphones, the iPhone XS looks better here and the colours are noticeably warmer. Even if you max out the digital zoom at 10X, the P20 Pro is still pretty impressive with sharp outlines and it has significantly less distortion. 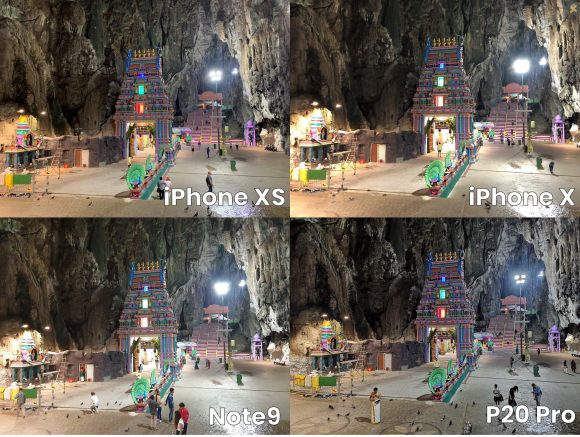 In this low light situation, the iPhone XS is noticeably better than the iPhone X. You can see its Smart HDR in action as the interior of the temple is visible without being overexposed. The rock formation and the shrine on the left are also well exposed on the iPhone XS.

With the Night Mode switched on, the P20 Pro has the lead in this scenario as you can take a long exposure shot without the need of a tripod. It looks well exposed and you can even see the rocky textures on the ground. In this scene, we wanted to see if each smartphone is able to capture the surrounding dark area in the cave while having the interior of the temple well exposed in the shot. Among the four, the iPhone XS and Galaxy Note9 seem to do better here. However, the iPhone XS has the extra edge as the dark areas of the rock formation on the left is much more visible. For portrait mode, all cameras except the P20 Pro uses the telephoto lens for depth of field effects. In the case of the P20 Pro, it uses the secondary monochrome sensor which has a normal wide-angle lens. Because of this configuration, you can see Rory’s nose and face appear to be larger and rounder compared to the rest that’s taken by a telephoto lens.

The Galaxy Note9’s bokeh effect looks good but the skin tone is a bit on the pale side. Portraits on the iPhone XS and iPhone X look more natural and Rory’s face appears to have some subtle smoothening with the iPhone XS. Despite having just one camera in front, all four smartphones are capable of taking portrait shots with the selfie camera. In this test, it all depends on each respective algorithm and how well it can separate the foreground from the background.

The edge detection on the P20 Pro was way off in this scene and it has a noticeable softening effect on the face which looks less natural. The Galaxy Note9 has better edge detection but the skin tone looks slightly fairer than what you get on the iPhone X and XS. Overall, the iPhone XS is the winner in this selfie test as the skin tone looks more natural, well exposed and it has better details.

The iPhone XS definitely has some beautification feature built in, and it can behave differently in various scenarios. There are moments where there’s excessive whitening as if I’ve applied some lotion on and in some situations, my face can appear redder than usual. Hopefully, Apple can address this issue which is also known as #BeautyGate in the upcoming iOS 12.1 update.

From this comparison, we can conclude that the iPhone XS is a significant improvement over the iPhone X particularly when it comes to HDR. Portrait and portrait selfies are noticeably better but we do hope that Apple can fine-tune its “beautification” algorithm so that it can work well in various situations.

What do you guys think? Which is the better overall shooter? Leave your thoughts in the comments below.