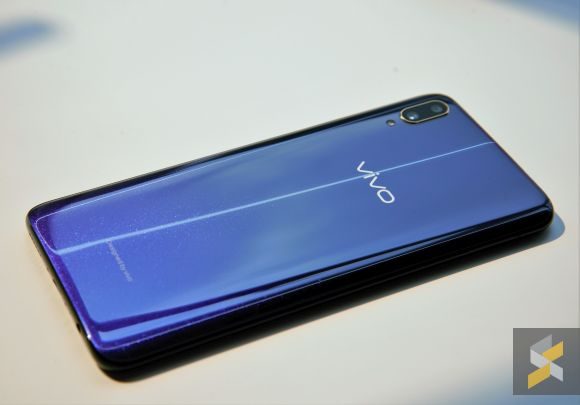 With the trend of edge-to-edge screens and narrow bezels, there is nowhere left to place a fingerprint scanner on the front of a smartphone. Device manufacturers these days have found multiple ways to move them to the back or side of a device. But it doesn’t have to be this way. vivo has introduced the in-display fingerprint scanner technology on their upmarket devices, such as the vivo NEX and the vivo X21. But now, this “high-end” feature is available at a lower price point and you can get it on the new vivo V11. 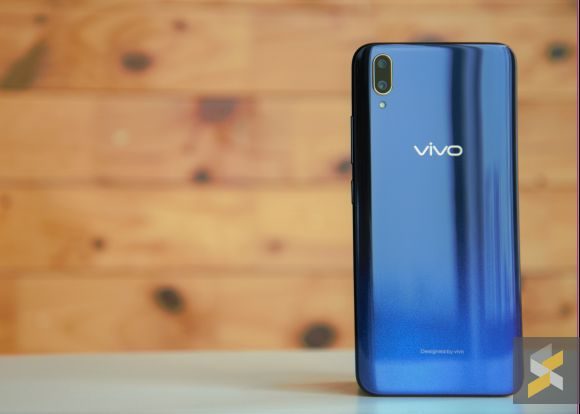 The vivo V11 comes in 2 colour schemes. The one we have is the gorgeous Starry Night that fades from blue to navy. It is also available in Nebula which has a blue to purple gradient. Our Starry Night V11 has a gold trim around its vertical dual camera module, giving it a premium touch. The back of the phone curves on both sides for an easy grip. Flip the phone around you will find what vivo likes to call the Halo Full View Display, which is just an elaborate way of saying this device has a full view display with a unique teardrop-shaped notch. The small little dot of a notch surrounds a selfie camera module, which reminds me of the OPPO F9.

Other than that, you will notice there’s no visible fingerprint scanner, because like I’ve mentioned, the V11 uses an in-display fingerprint scanner which I will get into later in this article. The bottom of the phone sports a micro USB port, a 3.5mm headphone jack and a speaker. On the right, you will find a power and a volume rocker while on the left there’s a dedicated card tray that supports 2 nano SIMs and one microSD.

Now, let’s talk about the specs The vivo V11 has a massive 6.4-inch Full HD+ (2340×1080 pixels) screen with a great slim bezel design. Despite its large screen, the device feels extremely light but surprisingly solid in the hand. It is a Super AMOLED panel which looks really good. It’s bright, the colours are vibrant and watching videos on the device is a pleasant experience.

Interestingly, AMOLED is necessary for the in-display fingerprint sensor to work because the AMOLED panel emits more light. As a result, it’s easier for the sensor underneath to scan your fingerprint.

Powering the device is a Snapdragon 660 processor which is a notable upgrade from the Snapdragon 626 chipset on its predecessor, the vivo V9. Besides that, the V11 also gets 6GB of RAM and 128GB of internal storage that can be expanded via a microSD card. Out of the box, it runs on Android 8.1 Oreo with vivo’s FunTouch UI skin on top of it. Keeping the lights on is a 3,400mAh battery that supports vivo’s “dual-engine” fast charge which can fully charge the phone within two hours. 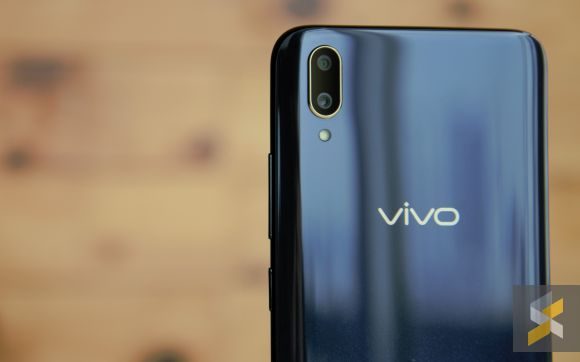 In terms of photography, the handset features a 12MP+5MP configuration at the rear and a 25MP shooter in front for selfies. Like any other smartphone manufacturers out there, vivo has also added AI scene recognition on the V11, where it automatically analyses a scene and offers you the best shooting mode. The V11’s AI Backlight HDR and AI Low Light mode uses AI algorithms that allows its users to capture photos even in difficult lighting situations such as sunsets. The dual camera system also supports depth-of-field effects too. You can also adjust the bokeh before or after the picture is taken.

For selfies, vivo has introduced the AI Face Beauty mode where you are able to make “realistic” digital cosmetic changes with various beautifying modes. For instance, you can choose to slim your face, enlarge your eyes, thicken your lips and so much more. But in my personal opinion, I think they don’t look very realistic. Finally, let’s talk about the vivo V11’s unique feature. It is one of the first mid-range smartphones to sport an in-display fingerprint scanner. However, it is not as responsive nor as quick as the typical fingerprint scanner, which is understandable given that this is a first generation technology. The good news is that the V11 also has a Face Unlock feature and it is so fast that you don’t actually have to rely on the fingerprint scanner. Just press the power button and you’re in, instantly.

However, while it might be cool to have an in-display fingerprint scanner, it is not as secure as you think. For example, one of my colleagues managed to unlock my V11 even though his fingerprint wasn’t registered. That leaves me wondering, did vivo made its sensor less stringent in order to achieve a higher unlocking success rate? But the thing that bothers me the most is the quick settings panel. Normally on Android, you can access this by pulling down the notifications tray. On vivo’s FunTouch UI though, it can only be accessed by swiping up from the bottom left, while the notifications tray only shows notifications. This is pretty similar to iOS on Apple’s iPhone. That means it will probably be frustrating for Android users at first, but eventually, you will get the hang of it.

For now, here are my thoughts

The vivo V11 is priced at RM1,699. From what I can tell right now, the vivo V11 is a decent mid-range device that has a few interesting features at its given price point. But, it also faces stiff competition from other devices like the Xiaomi Mi 8, which is priced at RM1,679. For RM20 less than the V11, you get an upgraded Snapdragon 845 processor which gives you way more performance.

Since I’m a gamer and performance matters to me, I would definitely go for Mi 8 instead. I’d rather spend my money on a better processor for more performance in-game than for a fancy feature like an in-display fingerprint scanner.

In fact, I personally don’t think that you should buy this phone solely because of its in-display fingerprint scanner as it isn’t very reliable and you’ll probably be using face-unlock most of the time anyway.

And even if you ignore the in-display fingerprint scanner, the vivo V11 isn’t that bad of a value proposition either. It has a large, crisp Super AMOLED display with slim bezels that is great for content consumption and video watching on the go. Performance outside of gaming is also pretty smooth, plus you get a generous 128GB of internal storage which is double what you get on a Mi 8.

So, if you’re not a gamer, and you’d like a well-built, ergonomically sound phone for content consumption, the vivo V11 is actually a device you can consider.