Almost 180,000 eligible Streamyx customers have yet to upgrade to Unifi Fibre Broadband Now is probably the best time to sign up for fibre broadband in Malaysia. You can get a 30Mbps broadband plan from as low as RM79/month, or 100Mbps broadband with unlimited quota for only RM129/month.

Unfortunately, not everyone is enjoying faster speeds at lower prices. There are still more than 1 million TM customers that are still connected on Streamyx. 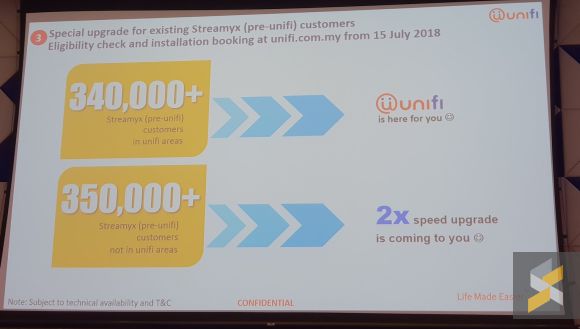 During their last media update, they have shared that 340,000 Streamyx customers were already covered by Unifi’s Fibre broadband network and they have reached out to them to make the switch. If they choose to upgrade, they will experience significantly faster speeds while possibly paying less on their monthly subscription fee.

TM has just updated that almost 50% of these customers have made the switch from copper to fibre with no extra cost to their current bill. TM wants their remaining subscribers that are in coverage to upgrade by March 2019.

For the subsequent 350,000 customers that are not in Unifi areas, TM will be doubling their speed up to 8Mbps in phases while they continue to expand its fibre network. The first batch of 180,000 Streamyx customers will be getting this 2X speed upgrade very soon.

According to Imri Mokthar, the Executive Vice President of Unifi, they are aware that TM’s copper network which was once termed as “high speed internet” may not be good enough for today’s demand. However, they remain committed to invest and build the needed network to bring everyone up to speed.

To deliver high speed broadband with a wide nationwide coverage will take time implement and they have also invested in 4G LTE to complement its wired broadband services. Another upgrade path for existing Streamyx customers is Unifi Wireless at RM79/month. At the moment, TM’s LTE network covers more than 77% of household population in Malaysia.

If you’re not sure if Unifi Fibre Broadband is available in your area, you can try searching for your address with their coverage checker.

Almost 180,000 eligible Streamyx customers have yet to upgrade to Unifi Fibre Broadband