The Microsoft Surface Go is now available for pre-order in Malaysia from RM1,749 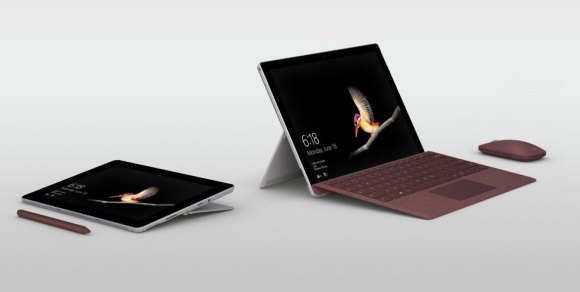 The latest, smallest and lightest Surface yet is finally available for pre-order in Malaysia. The Microsoft Surface Go is officially priced from RM1,749 and stocks will be available in Malaysia from 28 August 2018. The Microsoft Surface Go features a 10-inch PixelSense display that pushes a resolution of 1800×1200 in a 3:2 aspect ratio. Underneath its 8.3mm body is an Intel Pentium Gold (4415Y) processor that comes with up to 8GB LPDDR3 RAM and storage of up to 128GB SSD.

In terms of connectivity, it comes with a 3.5mm headphone jack, a surface connect port, a microSDXC Card Reader and a USB-C port. There’s a front-facing 5MP HD camera for video calls and Windows Hello, while the rear gets an 8MP shooter with autofocus. The Surface Go battery is rated to last up to 9 hours of video playback and it runs on Windows 10 in S Mode out of the box. Overall, it weighs 552 grams without the type cover. The base model with 4GB RAM and 64GB eMMC storage is officially priced at RM1,749 while the higher spec 8GB RAM with 128GB SSD option is going for RM2,399. The Surface Go Type Keyboard is sold separately at RM399 and you can also get it as a combo (without additional savings) for both 64GB and 128GB versions. As an extra promo, Microsoft is also giving away RM150 Grab vouchers with every purchase of the Surface Go. This can be redeemed from 28 August to 24 September 2018 via a redemption portal and it’s limited to the first 1,500 buyers.

If you’re interested, you can place your pre-order on the official Microsoft Store on Lazada.

The Microsoft Surface Go is now available for pre-order in Malaysia from RM1,749