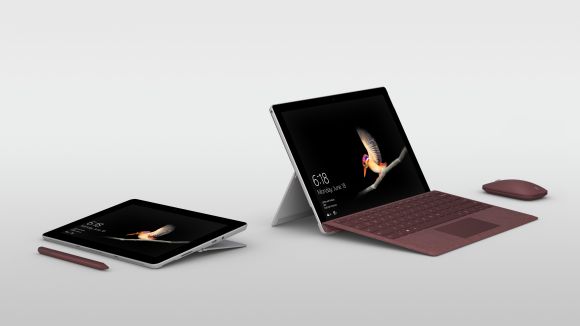 It looks like Microsoft is going right after the affordable iPad with the launch of their brand new Surface Go 2-in-1 detachable. It’s affordable, runs Windows 10 and even has a feature you can’t find on the company’s flagship Surface Pro.

Inside, the Surface Go is powered by an Intel Pentium Gold Processor 4415Y with Intel HD615 graphics. There’s a choice of 4GB or 8GB of 1866MHz LPDDR3 memory and either 64GB of eMMC storage or a 128GB SSD. Microsoft also claims that this laptop can last up to 9 hours on a single charge which is pretty reasonable.

Up front, you’ll be greeted by a 10-inch PixelSense display that pushes a resolution of 1800×1200, giving the 3:2 aspect ratio screen a pixel density of 217ppi. It is, of course, touch sensitive.

There is also a 5MP selfie camera in front alongside a Windows Hello face sign-in camera so you can log in with facial recognition. At the back there’s an 8MP rear-facing camera with autofocus. The rest of the Surface Go looks rather similar to the company’s tablets like the Surface Pro. Its Magnesium body is a little more rounded and a little smaller, but the design is definitely familiar. Since it’s so small and made out of magnesium, the Surface Go is really light, weighing in at just over 500g.

Surface Go will come running Windows 10 in S mode, which means you can only install apps from the Microsoft Store within Windows. However, Microsoft will offer a one-way switch out of S mode that the Verge reports will be free.

Interestingly, the Microsoft Surface Go comes with a USB Type-C port alongside a Surface Connect port, a microSDXC card reader and a 3.5mm headphone jack. I distinctly remember Microsoft telling me that not having a Type C port was better for the consumer so I wonder what happened here. Since it’s a Surface device, it will also work with tools like the Surface Dial and Surface Pen. Microsoft also developed a Surface Type Cover (USD99, around RM397) specifically for the Surface Go, because it’s so small, that will apparently give you a laptop-class typing experience with 1mm mechanical travel and a scissor key mechanism. This new Type Cover also comes with a glass trackpad with Windows Precision drivers.

The Surface Go will be available for pre-order in Malaysia starting the 2nd of August 2018. Unfortunately, they haven’t revealed what the official price will be just yet, but it has prices starting from USD399 in the States, which converts to roughly RM1,603.