Does having the widest 4G LTE coverage matter to Malaysians? Last month, two telcos made bold claims to have managed to hit at least 50% population coverage for 4G LTE – Digi (50%) and Maxis (55%). Issuing the who’s better statements within a short period, the two have been bitten by a bug to prove who has the true widest 4G LTE network. Question is, when telcos claim to have the widest coverage would you gauge it based on population percentile or percentage of coverage areas? Who sets the standards? And most important of all, does it matter?

To get to the bottom of this, we’ll have to set some key definitions first about what 4G LTE is. In a data-driven generation, we all emphasis speed and with that speed comes the necessary technology to support our thirst for it. Malaysians have gotten a taste of 4G LTE in 2013 and were offered by Celcom, Digi, Maxis and U Mobile.

Referring to the specifications set by the United Nation’s official oversight commission (ITU-R) that monitors information and communication technologies; 4G LTE at its truest (meaning) would translate to 100 Mbps on the move, and roughly 1 Gbps when considered locally wireless. At least, in theory that is. Looking around the globe at some of the fastest speeds, none of them break the 40 Mbps mark.

Referring to Open Signal’s “State of LTE September 2015” report, these are the top 5 countries with the fastest (average) LTE speeds: New Zealand is the chart topper, posting 36Mbps; Singpore gets runner-up with 33Mbps; Romania surprisingly gets 30Mbps; South Korea gets the 4th spot with 29Mbps; Denmark rounds off the 5th spot with 26Mbps.

Since the report refers to data from September, the info is backdated. Interestingly, Open Signal only has a sample size of approx. 300 thousand users – yes, a size quite small when you’re talking global proportions.

In retrospect, Malaysian usually see a range of 15Mbps to 30Mbps but there have been instances where you’ll see a spike that actually meets the aforementioned standards. Surpassing and reaching LTE-Advance levels, which puts Maxis at the forefront (for the time being). 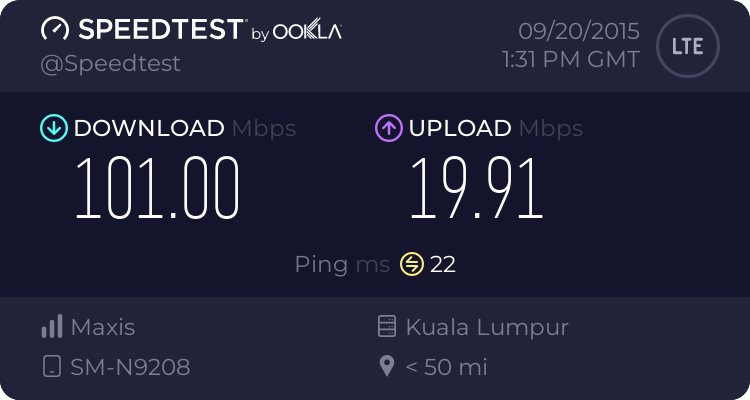 Both sides will have a valid say, for example, what use would there be if you traveled to a desolated area in some deep jungle in the peninsular or eastwards? It’d be pointless (in a sense) to erect a cell tower in that area, because there wouldn’t be anyone to serve. But at the same time, if anyone were to be placed in that situation, aren’t they supposed to be covered, if their mobile operator is indeed the widest?

Taking a look at the playing field, both telcos above (actually the major 4) run on the even platform – two spectrums: 1800GHz and 2600GHz. Ironically when 4G LTE was first rolled out, the iPhone 5 wasn’t able to run on LTE, as all networks were solely running on 2600GHz at the time. Lower bands get you better signal penetration (indoors and outdoors) but higher bands give you faster data speeds. In a race to the top, are telco providers forgetting that unless there is a way to quantify and verify their 4G LTE population coverage, it just simply an unrecognised title to hold? Do they deliver as promised? From our comments on Digi’s and Maxis’ coverage articles, many users are still facing service related issues. They’ve attached photos for reference, testing their speeds in claimed areas and disputing them accordingly.

For customer experience to be considered, our local telco players tend to knock about the notion of providing the best but are they really delivering? Nationwide, many users have voiced out about drops in cellular quality but we’d rather hear your thoughts; many factors go into objectively testing networks around Malaysia but with our readers coming from all over, we hope to get some feedback and your concerns to your providers and let them address them. Should Malaysian cellular providers bother in claiming the top coverage(s) title? They should first mediate issues that are faced by their users on a day-to-day basis – delivering what users need, consistently giving them the value they paid for in the first place.

If we were to take part in a full-blown test that manages to encapsulate the varying telcos and their corresponding ability to cover areas, there would be many puzzles pieces and putting them together would include:

Taking a respective number of locations – e.g. over 100 locations nationwide (East Malaysia and West Malaysia)
Using the same device, test the four telcos cellular data coverage
Establish if there is 4G LTE in the area through corresponding symbols on these devices
Test their speeds, take multiple tests on each network and get an average
Find out if these 4G speeds are better than 3G HSPA+ or even lower bands (cause if it isn’t, what’s the point of having the widest 4G coverage?)

2G, 3G, 4G and whatever else that goes along with your user experience, it should be maintained across all their offerings, not being better here or coming short on the other. U Mobile has proven that while they were the new player, they’ve established a foothold in their 3G HSPA+ network with 4G-like speeds. We’re sure that users have had moments where nothing can be done on 3G (even with good coverage in that category).

We have to start questioning the reasons why our providers are busy worrying about widest and fastest? Users would much prefer something tangible, and at the end of the day if their telcos work for them in their corresponding areas. Throwing marketing fluff here and there does nothing for their consumers.

All we want is for our local players to show us why we should be on your network – through user experience, not some coverage map. Beside the fact, being the widest network shouldn’t be an issue, everyone should offer a wide network. Cellular data has become a necessity and our consumers deserve that, at the very least.

Does having the widest 4G LTE coverage matter to Malaysians?